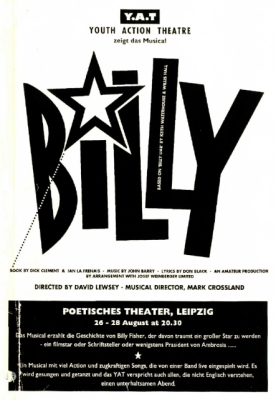 Billy Fisher lives with Mum, Dad and Gran in Stradhoughton and is an undertaker's clerk - but in his mind he is President of Ambrosia, a film star, a scriptwriter - and anything else glamorous that happens to occur to him! However, nobody else believes him, certainly neither Barbara nor Rita, to both of whom he has promised marriage, though there is only one engagement ring! He frantically tries to lie his way out, so he can run away with Liz, the only girl who understands him, but we know he'll never quite make it.

Billy has a strong, funny and fast-paced story, with outstanding songs such as "Ambrosia" and "Some Of Us Belong To The Stars".