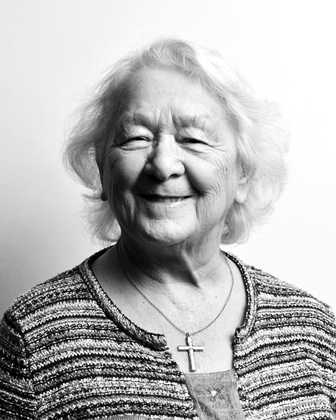 Eileen was born in September 1927. Her natural mother was unmarried and so she was lucky enough to be adopted when she was about 6 months old by wonderful parents who were in their early 30’s. She grew up as an only child but never lacked friends and companions.

When she left school she trained as a secretary/shorthand typist and experienced several interesting jobs, 2 of which were in hospitals. Her luck held when she met and married her husband Den and they became the proud parents of 5 daughters. Inevitably the girls became involved with Brownies, Guides and Rangers and Eileen served on the Local Association Guides committee, chaired by the District Commissioner.

As the girls got more independent Eileen became involved with the Kingston WEL-Care Association which helped unmarried mothers and their babies. This interest led her to become a registered foster-carer for the tiny babies waiting to be placed for adoption. Gradually the need for this particular fostering became much less as the young mums were able to keep their babies more easily.

In 1994, Eileen was the recipient of the Mayor's Award for Community Service in the Royal Borough of Kingston-upon-Thames.

In 2005, Eileen (and Den) were awarded the artsRichmond Accolade for their contribution to Drama in the London Borough of Richmond-upon-Thames.

"I feel privileged to be accepted by the group as 'one of the crowd'. I enjoy their company and I'm interested in their activities. I feel very proud of the genuine hard work and enthusiasm they put into each production - whatever part or role they are playing. It's a bit like having an extended family!".

When my 16-year old daughter joined Youth Action Theatre in 1983, she not only embarked on the very interesting experiences of 'theatre' and entertainment, which developed into her making the 'media' her career, it also opened the door of interest and enjoyment for me and my husband, engendered by its founder, Eric Yardley.

Gradually our daughter's enthusiasm led to our closer involvement with YAT and its more practical elements. It took us with Eric and the Company to Berlin, Leipzig and America and allowed us to get involved with young people and activities not experienced before.

Luckily I am still able to retain some 'modified' activity within YAT and my enthusiasm and loyalty are as strong as ever. YAT is a very valuable asset to the development of commitment and comradeship for its young members which is focused within all its activities.