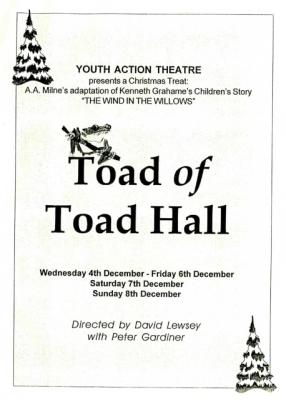 The Director, David Lewsey, said that this play was chosen because of it's wide variation of characters, thus enabling YAT to continue it's tradition of casting everyone all who want to participate in the production.

In addition, because of it's theme and style, it would open up the age group of the audience so that YAT's first Christmas production for several years could be enjoyed by both the young and old.Toad of Toad Hall
by Kenneth Grahame
Stage adaptation by A.A.Milne