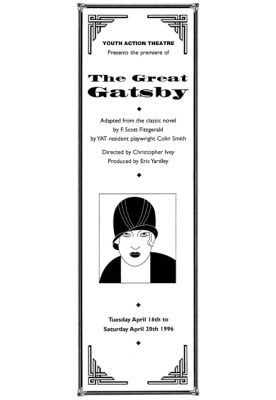 Fitzgerald, it is rumoured, once said to Hemmingway that "The rich are different from us", "Yes" replied Hemmingway, "They have more money than us" and The Great Gatsby illustrates this showing us the same dreams and flaws that wake us every morning and accompany us into sleep.

On embarking on the journey that has been directing The Great Gatsby I spoke to many friends whose opinuions I value asking what they felt were the novel's central themes. All of their answers differed and some quite drastically, from a savage indictment of the American Dream to an eulogy of the dying class structure at the beginning of this century, leaving me perplexed. I had read the novel and whilst I could not disagree with any of the advice I had been given I could not help but feel that they had missed the point. The Great Gatsby is a classic text because at it's centre there is a beautiful storyline with carefully drawn characters you can believe in and some you can truly care for.

Colin [Smith's] adaptation misses none of this, moving dramatically along the line of the novel, illustrating the glamourous facade of the times - hiding the passions, universally felt, which drive the play to it's tragic ending.The Great Gatsby
by F.Scott Fitzgerald
Stage adaptation by Colin Smith

Review by Peter Steadman for TTC's Theatre Magazine (May 1996)

The final dress rehearsal of The Great Gatsby took place in a school hall. There was no stage and just the furniture the school had around. The evening provided some excellent moments although there was still something lacking and disjointed about the whole.

Peter Gardiner had been fine as the understated Gatsby of the title, whilst Steven Peters was already an form as Nick Carraway, the neighbour Gatsby uses to set up a meeting with his old name, Daisy.

There seemed little for these two to improve upon for the public performances. As the rest of the cast stepped into costumes Eileen Baker and Alison Barker had found for them, however, the ensemble came together. At the actual performances, Peter grew into his part and Steven showed even greater understanding of Nick in the days leading up to his thirtieth birthday. Steven's was a sensitive and intelligent portrayal. Peter's annoying repetition of "old sport" fitted into the facade that Gatsby had created for his life. Whilst many hinted at the likely source of his wealth, the wonderful Pablo Reyes, as seedy gangster boss Meyer Wolfheim, came very close to letting the cat out of the bag.

Tania Foley gave a good, if rather serious, performance as Daisy. Perhaps the part called for more of the flighty flapper. As her husband Tom Buchanan, Ben Davies was entirely convincing. This two-timing city man seemed less distraught than he might have been at the loss of his lover Myrtle Wilson and the chaos he and Daisy, in their insouciance, wrought upon the lives of all around them. Myrtle's main scene had its staging problems. Hannah Smith deserves an opportunity to bring out the bubbly character she could barely hint at here.

Jerome Phelps was dealt some difficult stuff. The photographer Mr McKee was not much of a part, but wow, as Gatsby's father Mr Gatz, Jerome showed us the gait, the posture, the gesture and the pondering phrase of an old man each one of us knows.

Mrs McKee was definitely in control in that household, and between dress rehearsal and performance Alice Langrish stepped into her part masterfully.

The furniture removals (there were even more of them in the dress rehearsal!) went extremely well. It was as though the movement which was missing from the scenes themselves was packed in here.

All the crew seemed to take their lead from Rob Lee who had that undertaker's knack of being in the right place at the right moment, retreating into the background once the scene was set. Very neat.

Chris Waiting gave us another of the memorable moments as he managed to conjure Gatsby's whole library of books out of the thin air around the stage.

Integrating music into the performance proved a difficult task. Too often actors were overpowered by the volume of the orchestra and one wondered whether the discordance was really appropriate to the period. But Richard Whalley is a most capable pianist who constructed the ambience for audience and actors, giving the orchestra the sure fundament it needed.

Altogether an excellent evening's entertainment during which the audience was treated to an array of talented performers who we look forward to seeing more of in future productions.