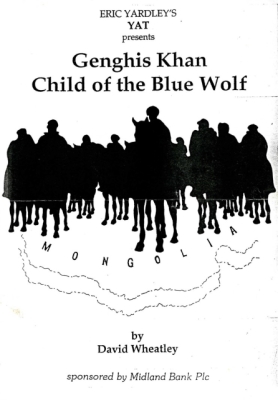 Period 1204 - 1227: "The voice reminded them of their history; According to legend we were decended from the mating of a Blue Wolf and a White Hind, the ruthless and the gentle. Never was that inheritance more surely demonstrated in one man, than it was in him."

YAT's first production in 1994 was a WORLD PREMIERE of a script written by fellow member David Wheatley.

David Wheatley has been a member of YAT since 1984. Child of the Blue Wolf is his first major play to see the light of day. David had fiddled about with writing for several years until one day during the Summer of 1993 when Eric Yardley finally called his bluff and announced that David was writing the play for the February 1994 slot. The only way to avoid looking stupid was to hit every library for miles and get some research done. The result is Child of the Blue Wolf and whatever else you can say about the play, though it may be guilty of some slight dramatic licence with the minor characters, the major events of the play are historical fact.

Genghis Khan - Child of the Blue Wolf
by David Wheatley

David Wheatley's carefully researched epic tells the story of the Mongol warrior who welded a group of warring tribes into a spiteful army that killed, pillaged, raped, destroyed and conquered on its way to creating the Mongol Empire; the largest contiguous land empire in human history. Whilst the focus of the play is on the killing fields and the personal story of those directly affected by it, it also underlines a savage irony that these bullying conquerors could be goaded into retributive overkill whenever one of their victims dared to strike back.

Review by John Thaxter for Richmond and Twickenham Times (March 1994)

THERE has recently been a heated debate at Teddington Theatre Club about the appropriate role for its young off-shoot, Youth Action Theatre, despite the fact that senior productions draw on the talents and commitment of YAT graduates

Last week YAT itself came of age, with a brand new play, Genghis Khan: Child of the Blue Wolf, the first ever to be especially written for the group by an ex-member and staged with flair by ex-member David Lewsey.

As its title implies, David Wheatley's carefully researched epic tells the 800 years old story of the Mongol warrior who welded a group of warring tribes into a spiteful army that killed, pillaged, raped, destroyed and conquered on its way to creating the largest empire the world has ever known.

Alas, like Marlowe's classic Tamburlaine, which Genghis Khan resembles in style and tone, the focus of Wheatley's play is on the killing fields. But he also underlines a savage irony that these bullying conquerors could be goaded into retributive overkill whenever one of their victims dared to strike back.

Best indication of Wheatley's potential as a dramatist came in an extended scene for four white-clad women in a besieged Chinese city, which enabled Jo Viney, Sarah Moulds, Alex Brown and Gaby Wine to develop their roles into clearly defined individual characters.

But the even-bonded spread of speeches and situations made the play an excellent vehicle for a large youthful cast, led by George Scott as a strong, likeable Genghis, but with Peter Gardiner stealing scene after scene as his thoughtful cook and biographer Shiki.

YAT veterans Joe Early and Giles Porter provided comic relief as a languorous Sultan and his sly assistant, with Louise Doubble as the memorable mother Sultana. And Jeremy Ison gave the performance of the evening as a Shavian-style Taoist monk teaching Genghis more in five minutes than he had learnt in thirty years of bloodshed.

Christine Osborne provided an effective scaffold set, running diagonally across the large playing space. But although it was based on an idea by the director himself it was not fully exploited except as a giant playground climbing frame to give athletic and vertical interest to his production.