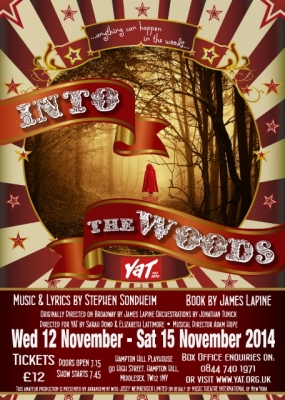 ‘Into the Woods’ had its Broadway première in 1987, featuring a score by Stephen Sondheim and book by James Lapine. It re-imagines the magical world of fairy tales as the classic stories of Jack and the Beanstalk, Cinderella, Little Red Riding Hood and Rapunzel collide with the lives of a childless baker and his wife. Sondheim and Lapine use beautiful symbolism to represent all that the Woods encompasses; sexual awakening, dark forces, knowledge and power.

YAT returns with this Tony award winning musical performed with their own unique twist. Set against a backdrop of Victoriana carnival and the creative expression of steampunk we journey into the woods to discover what can happen when all our dreams come true...

With a soundscape of soaring melodies and witty lyrics this darkly enchanting story explores life after ‘happily ever after’. After all ‘Anything can happen in the woods...’

An ambivalent Cinderella? A blood-thirsty Little Red Ridinghood? A Prince Charming with a roving eye? A Witch…who raps? They’re all among the cockeyed characters in James Lapine and Stephen Sondheim’s fractured fairy tale. When a Baker and his Wife learn they’ve been cursed with childlessness by the Witch next door, they embark on a quest for the special objects required to break the spell, swindling, lying to and stealing from Cinderella, Little Red, Rapunzel and Jack (the one who climbed the beanstalk). Everyone’s wish is granted at the end of Act One, but the consequences of their actions return to haunt them later, with disastrous results. What begins a lively irreverent fantasy in the style of The Princess Bride becomes a moving lesson about community responsibility and the stories we tell our children.

"Into The Woods" is one of my favourite shows and I must have seen at least 6 different productions over the years both professional and amateur.

I knew from experience it was in good hands with Lizzie Lattimore and Sarah Dowd directing, but this would have the been the first time I would see if our talented team of youngsters could pull it off. It is such a difficult technical show both in its choreography and music, which needed a strong cast and strong direction.

On entering the auditorium, the set blew me away. It was stunning, using bridges and steps to create towers and forests complimented by the lighting giving it a 3 dimensional feeling. Knowing how little time our YATers have to get in and build their sets, it was truly a masterpiece with such attention to detail. I particularly liked all the clocks painted on available surfaces making us aware time was the essence to break the spell.

As the act opened we were whisked away to a world of fairy tales where every character was believable despite their young age. This was also helped by the costumes and make up which were vibrant and imaginative, especially the ensemble.  I also thought it was a great use of the ensemble to have them puppeteering the Cow and Hen and characterising the Harp. Even Cinderella's birds were created by them individually.

The singing was of a high standard with the Bakers wife and Rapunzel standing out for me. The Witch gave the song performance of the show with her witches rap.

I have to say of all the productions I have seen the two Princes in this one stood out as my favourites so far. Their energy and comic timing put them on par with some of the professionals I have seen.

This was a fast pace and beautifully choreographed and extremely well directed piece with loads of comedy and pathos. An extremely enjoyable evening and yes, they all pulled it off for which we should all be very proud of them. I think the full house and standing ovation at the end of their final performance proved that I was not alone in my admiration of this fantastic production.

Well done YAT from the directing and the cast to the back stage, lighting, sound and band, the set designers and builders. Everybody involved should be extremely proud of themselves. It was truly a wonderful piece of theatre.

Into The Woods was nominated in three categories at the artsrichmond Swan Awards for Drama and Musicals 2014-2015: