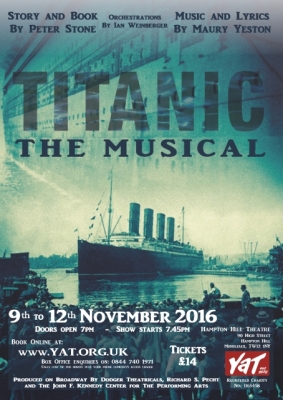 On 15 April 1912 the ‘floating city’ RMS Titanic sank off the coast of Newfoundland taking the lives of 1,517 men, women and children. This tragic disaster changed history forever. It is a remarkable story of compelling hope followed by sheer anguish. The narrative is a requiem that is grand and catastrophic but also a tale of hope and courage.

As we meet characters from 3rd, 2nd and 1st class, the show pays tribute to those who sailed on Titanic’s maiden voyage and highlights the rigid class structure and economics of the time. Maury Yeston and Peter Stone’s musical intertwines their stories, relationships and shared aspirations regardless of their background or social stature. Each character has the name of a genuine passenger giving the story deeper meaning and a tribute to those who lost their lives on that fateful journey.

This re-worked ensemble version of Titanic the Musical was originally staged in London at the Southwark Playhouse in 2013 to great acclaim. Embark on an epic, ensemble show with soaring choral set pieces exploring the lives of those at the heart of this historic event.

As I approached the Hampton Hill Theatre last night, I was steeling myself for the second major human drama of the day so far. Unlike the unpredictable conclusion of an election day, Titanic at least has a dependably disastrous ending, which offered some small comfort.  Perhaps it will be cathartic, I consoled myself, to experience the 1514 deaths at close hand.  What I was not expecting was to leave feeling hopeful, uplifted even, by a musical I thought would only sink my spirits.  The efforts of the 30+ strong ensemble (all of them 16-26) and 25 strong creative team (many of whom also young people) in bringing this unusual musical to life, are clear in every aspect of the production from the well-considered casting to the creative choreography.  The effect is remarkably polished and professional, and yet there is real beauty in this YAT production in the rawness, emotion and power of their young and largely untrained voices, a quality that Broadway would have polished away.

The ‘disaster musical’ is certainly not something you might expect to take off, yet despite the odds, its debut on Broadway won 3 Tony awards, however Titanic has had only had short runs and never experienced West End success here in the UK.  This YAT production, performed with special permission from Tams-Witmark, is a re-working of the ‘chamber-ensemble’ version first staged at Southwark Playhouse in 2013 (revived in a short run at the Charing Cross Theatre earlier this year).  Directors Sarah Dowd and Elizabeth Lattimore felt that this version focused more heavily on the “heart of the story”, the lives of the passengers and the bonds between them – and what lives they were!

Those concerned with historical accuracy can be satisfied that Jack and Rose are nowhere to be seen, along with that infamous floating door (from Cameron’s 1997 film version) instead, each character is based on a real-life passenger or crew member. It is a far more touching and less melodramatic or cliché rendition of the tragedy, and one that allows us to honour the dead by learning something of their lives.  The character of 2nd Class passenger Alice Beane, played with glee and guts by Cath Bryant, introduces us to all the richest people of the with the excitement and cattiness of a modern day ‘Daily Mail Online’ devotee.  Whether or not Alice continually snuck up to the first-class deck to “dance with millionaires”, however, is perhaps more down to artistic licence. YAT have also evidently done some further research in their character building, and bios of some of the real passengers are projected onto the stage prior to curtain up, a thoughtful historical touch.

Another surprise, that is especially pertinent in light of the recent election, is the political nature of the narrative. It is not purely a tragic tale, and tackles issues of class, industrialisation, immigration.  It is also not afraid to point the finger of blame at those who may have been responsible.  “[The passengers] are in God’s hands”, the Captain (played with maturity and emotional depth by Benedict Lejac) declares solemnly as they prepare to evacuate, but it is his Stoker (brought to life by the stirring, arresting voice of Liam Hurley) who reminds him the fate of his passengers is in their own hands, first and second class are “closer to the lifeboats, aren’t they?” and consequently, they are the ones who will survive.

The structure of the play creates tensions between the classes on the ship, who are divided up by thoughtful staging so that they are often looking at each other from decks above or below but seldom interact; the ship itself and the lighting of it with a ghostly blue glow are evocative and well considered. The class tension is broken by the ensemble pieces.  Where the cast joins in unison and the music swells, their voices threaten to burst the walls of the theatre with their sheer power, melt hearts and jerk tears with their spirit and soul.  The unity of the diverse communities brought together by their dreams of a better future in America (Bobby Doherty notably shines here with her soul-searching performance of a young Irish women Kate McGowan in ‘Lady’s Maid’) is devastatingly poignant knowing that they will perish, and especially so considering the current immigration ‘crisis’ closer to home.

Titanic is not a musical about sinking, drowning, dying but about dreaming, believing and striving for more. It is about searching for what truly makes us happy, and our debt as a community to those around us.  The Captain “holds [the passengers] souls in the palm of his hand” but in placing others selfish interests above his responsibility, lets them go.  Isidor Straus and his wife Ida (played with touching sincerity by Matt Nicholas and Freddie Haberfellner) would rather face death together than live apart.  There is something to be learned from each of the stories on the Titanic, beautifully realised by the cast of YAT, and something to lift even the most down-hearted of spirits, warm the coldest of souls.