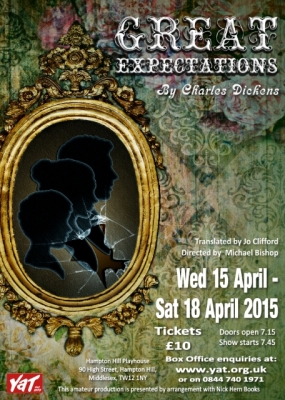 Almost fantastical at points, Great Expectations is Dickens' seminal work revolving around themes of greed, innocence and gratitude. Jo Clifford's adaptation is told through a dreamlike state reflecting key moments in Pip's turbulent life. From his chance encounter with an escaped convict as a boy to the spectre like Miss Havisham and wickedly beautiful Estella, a chain of events is set in motion that catapults Pip from impoverished blacksmith's apprentice to the upper echelons of Victorian London. However, as the addiction to high society and self-preservation takes a stranglehold, Pip begins to lose sight of what matters in life…those who have been with him through thick and thin and who truly care for him.

Such is YAT's reputation that audiences now go to see their productions with great expectations. Their recent presentation of Dickens's Great Expectations, adapted by Jo Clifford was no exception.

Clifford's version tore away a lot of the clutter surrounding the novel's complex plot, revealing the heart at the centre of it, the rise and fall of Pip, a blacksmith's apprentice, living on the edge of the Thames marshes, and his relationship with Estella, the adopted daughter of the vengeful Miss Havisham who was let down on her wedding day. After a frightening encounter with an escaped convict Pip's fortunes begin to change, especially after being summoned to Miss Havisham's home to become the playmate of the beautiful but unresponsive Estella. Later an unknown benefactor enables him to go to London to become a gentleman, leaving behind his devoted blacksmith brother-in-law. After some years he inherits a fortune again from an unknown source. Now feeling confident, he returns to his roots to propose to the love of his life, the haughty Estella who rejects him. Love does not conquer all, it seems. Miss Havisham has gained her revenge.

Enough of the story. Suffice it to say that Dickens populated this dark Victorian tale with a host of colourful, stand-out characters which YAT's cast thoroughly made their own. Both young and older Pips (Joe Evans and Sam Clunas) were entirely believable as the protagonist and narrator, as were Miss Havisham and Estella (Lucy Hannegan and Karin Carlson) in their pivotal roles. I hate to pick out individuals, but I particularly liked Joe (Benedict Lejac), Jaggers (James Rooza) and Wemmick (Alex Farley) in their portrayals, just this side of OTT. They were well supported by a disciplined ensemble of actors in smaller roles and in the crowd scenes.

The staging was cleverly arranged on different levels with illustrative back projections, though I think some of the buildings filmed had certainly been built since the story's setting. Perhaps a little less clutter would have enabled movement in the crowded setting of Joe's cottage to have been a little less cumbersome.

This was an assured production, directed by Michael Bishop whose first major production for YAT this was. He now joins the increasingly talented band of senior members of the group who pass on their experience and skills to their younger alumni. Floreat YAT.

Great Expectations was nominated in one category at the artsrichmond Swan Awards for Drama and Musicals 2014-2015: