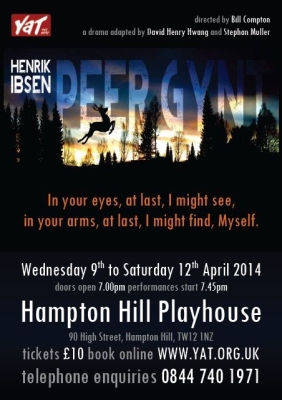 This Norwegian fairy tale is the most widely performed of all Norwegian plays. It has been described as the story of a life based on procrastination and avoidance and blends folkloric fantasy with unsentimental realism. In the adaptation that YAT will be performing, Henrik Ibsen's classic is revisited with the use of contemporary metaphors and language. We follow Peer Gynt through his entire life, from delinquent youth to wealthy and bitter old man, as he encounters everything from trolls to his greatest love. One constant persists: his tragic determination to remain true to himself.

In this play, as in King Lear, Long Day’s Journey into Night and Ibsen’s Ghosts we at first stand in awe; they are journeys which open vast issues and they require a lot of concentration and patience.  So, I must firstly commend YAT for their endeavours to succeed on this journey.  I am not convinced it was a wholly successful one, but en route there was much that was impressive and the end did eventually justify the means.

The first such impressive moments were technical: a basically bare stage and some superb lighting: then, magical music, beautifully realised. The very opening started us gently on the journey and the music was a prime mover throughout. Then the choreography: with a limited acting area, Bill Compton moved and grouped his actors extremely well; also, he is not afraid to keep his actors still when the dialogue necessitates this.

The script, as the programme informed us, was an adaptation from an American and a Swiss playwright.  From the American point of view this inevitably produced some lines I could have done without (‘you go your way, I’ll go mine’), and a performance from Mark Williams which, although energetic and well spoken, was more from across the Atlantic than the North Sea, and did not totally convince me.  Peer is lost in daydreams and lacks a sense of real purpose, but he came across here more of a ‘Jack the Lad’.  I totally accept that in the two-hour version of an original five-hour play this had to be the case and obviously episodes had to be curtailed or even cut, but the result was more of a patchwork quilt than a progression.  However, the highlight of the first half was the Troll sequence, thanks mainly to some spectacular costumes, fine choreography, and the performance of Ollie Horsfall as the Troll King, who made a strong impact.

However, the second half completely restored my faith, since it produced the hit of the evening in the person of Christian Dart, who gave us a carefully studied portrayal of Old Peer.  He has great stage presence, and a strong command: you watch and listen to him.  He was fully able to convey the mature Peer and was finally able to convince us that he was always, in Solveig’s eyes, hope and love – as the synopsis told us, and this is surely what this play must work towards and where it must subsequently end.  He also brought out the despair following the shipwreck and the final scenes were most moving and impressive. The choice of Amanda Astwood to play Ǻse and the elderly Solveig was a fine touch, and she did a good job in both.  I do feel, though, that the two halves of the play and Peer Gynt as a character in this production did not entirely gel since the styles were, to my mind, in opposition.

This was a play with a very large cast, many playing several roles, and to try to single out individuals is an almost impossible task.  It is also difficult to work out who everyone was, at various moments, but that is the play’s problem.  I’ve highlighted Ollie Horsfall, and will also highlight Alex Farley as the Coin Inspector (who was, in the Ibsen original, the Button Moulder, a really splendid, pivotal, and sinister part) but really there were so many well-played cameos, which kept the play moving and I can only say that they were a major contribution to the success of this production. The pace and ensemble work was first class, so I will leave matters there.

Peer Gynt is a mad sprawling masterpiece, and I love it! As a kid, I'd heard so much about this crazy play that roamed the world - from the Norwegian fjords to the Egyptian Sphinx, and featured shipwrecks, trolls and monsters - that I eventually summoned up the courage to go to a theatre for the first time on my own. That was in 1962 at The Old Vic where Peer was played by a middle-aged Leo McKern (an actor who never ever really seemed young!). I learned quickly that this was a play about a lot more than spectacle, and as much about the worlds within as those without. Telling the story of one life from adolescence to old age, it is a morality tale as universal and as potent as Everyman, although, potentially, a lot more fun.

The play first shows us Peer as an irresponsible but imaginative youth, prone to trouble and tall tales. Like him, the audience is unable to distinguish reality and fantasy as he scandalises his community, eloping with a bride then abandoning her on her wedding day, before entering- and luckily escaping from - the Kingdom of the Trolls. He meets and falls in love with Solveig and she promises to wait for him. He also loves his widowed mother despite proving the bane of her life. On her death, he leaves Norway an outlaw. The second half portrays the adult Peer, now in the Middle-East, in various guises as dodgy business man, fake prophet and bogus scholar. His ‘career’ culminates with the acclaim he seeks as emperor, but only in a Cairo madhouse! Down-and-out, returning home to Norway, he is shipwrecked and pursued by inner demons. Seeking desperately to discover some meaning to his life, he finally finds Solveig still waiting for him, with her faith, hope and love. He dies in her arms.

Ibsen may not have really intended Peer Gynt for performance. Written in verse, published in 1867 and not performed till 1876, with its 40 or so scenes it was really beyond the capabilities of the representational proscenium theatre of the day. Today, we are better able to realise its cinematic potential, and not just through the technical advances of the modern stage. I’ve seen many productions since my first and have learned that it’s not size that counts; I remember The Actors’ Touring Company did a brilliant version with a troupe you could count on one hand.

Wisely, recognizing the need to present a reduced version, Bill Compton chose a contemporary adaptation reducing the five acts of the original to two, but thankfully editing out the Americanisms in the text. There were inevitable losses. I particularly missed the story of Peer’s alter-ego, the boy whom Peer sees chopping off his finger to avoid military conscription, and whose funeral he witnesses as an old man on his return. There were also some curious – but not inappropriate - interpretations of Ibsen’s characters. For example, the mysterious Bøyg monster, often seen as representing Peer’s inner Self, was here given an economic twist when renamed The Hidden Hand (similarly, the Strange Passenger who haunts his old age was now called Cancer!). Structurally, the adaptation made most changes to the second half; allowing the Old Peer to look back at his middle-aged self from the deck of the ship on which he is heading home, and (in a neat piece of rewriting) meeting his death at the hands of his younger self, whose reckless path he attempts to obstruct.

There were some very good individual performances. Of the three Peers, Mark Williams made the strongest impact with the physicality of his performance, especially in his opening scene when describing his ride on a reindeer. His gangly frame and cheeky grin encapsulated the Young Peer. Both Fred Ezekiel and Christian Dart, as his middle-aged and older counterparts, had a strong presence but their work was harder, as younger actors conveying the cynicism and bitterness of age. Amanda Astwood and Mima Davey gave strong performances, respectively, as Ase and Solveig, cleverly and ambiguously costumed for the moving final tableau in which they simultaneously cradled the young and old Peers. I also liked Caroline Bradshaw’s feisty Anitra, Alex Farley’s assertive Coin Inspector, James Parker’s sinister green-gloved Cancer and, especially, Ollie Horsfall’s marvellous Troll King, his sonorous voice bursting expressively through the fixed exterior of his costume.

But, essentially, YAT plays are about the Ensemble and this production was no exception. The whole audience lifted during the opening folk dance, including some (presumably last-night improvised) cross-dressing on the part of Christian Dart! The Troll Kingdom scenes were sheer magic, enhanced by Anna Carlson’s wonderful masks and costumes.

Bill did not satisfactorily resolve the massive design issues and, for this, he has my sympathies. In Educating Rita, Willy Russell’s heroine answers an OU exam question about staging the play by writing that she’d “do it on the radio!” Bill opted for the next best thing, empty space. However, where Shakespeare was able to transform a scene instantly through imaginative use of space on the Elizabethan stage, here we were unfortunately constrained by the end-stage configuration.  Worse still was the decision to divide into two unconnected upstage/downstage levels. Although effective for representing scenes like the drowning sailors, it reduced all movement to a Left-Right-Left orientation. Without any thrust to vary this, it reinforced the picture-box effect, minus the realistic spectacle that is the proscenium stage’s raison d’être. Despite Michael Bishop’s fine lighting, the few projections did not adequately cater for this. The lack of any furniture compounded this, making, for example, the businessmen in Act Two, having to adopt stylised poses throughout their dialogue with Peer.  Although well-played by Anna Carlson, Johanna Dart and Beatrice Ragea, they were clearly restricted by this. Worse still, Amanda Astwood’s big moment, Ase’s moving death scene, was horribly constrained by being played uncomfortably half-on/half off a rostra-block, far stage-right. A different approach to movement and furniture, such as that employed in Physical Theatre, would have helped here.

Ibsen’s Peer Gynt is a play with extraordinary prescience about growing-up, discovering the world and oneself, but it is also a play about imagination, performance and theatre itself. Although it didn’t always succeed, it was a brilliant choice for YAT. Full marks to Bill and his team for daring to give it a go!

Peer Gynt was nominated in one category at the artsrichmond Swan Awards for Drama and Musicals 2013-2014:

The production went on to recieve one award:

Best Youth Production
"An accomplished production which was a feat of imagination and creative skill combining acting, dance, costumes, lighting and stage set. The whole team came together to create something stunning. The Nordic scene was tellingly suggested and the costumes were a real joy, especially the Trolls who were awesome!"