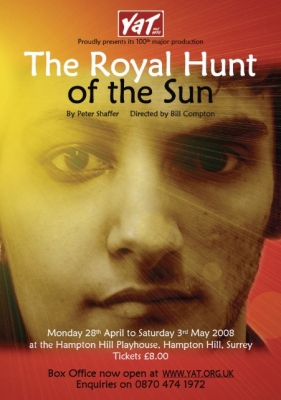 In the rich, humid air of sixteenth century Peru, Atahuallpa, the Sun-God King, meets Pizarro the Conquistador, representative of the Spanish Empire at its most insatiable. While the Inca King is convinced of his own immortality, the Spaniard is cynical and greedy, leading to a collision of power and authority. Soon they are both locked in a struggle for survival; one of them must die and the survivor must face mortality and the terrible truth of the world he lives in.

The Royal Hunt of the Sun is an unforgettable drama of pride, empire and the conquest of bodies and souls.The Royal Hunt of the Sun
by Peter Shaffer
Don't think we are merely going to destroy his people and lift their wealth. We are going to take from them what they don't value, and give them instead the priceless mercy of heaven. He who helps me lift this dark man into light I absolve of all crimes he ever committed.

Intent on the conquest of Peru, Spanish soldier Pizarro entices recruits with the promise of inconceivable riches, while the Church claims the cause for Christianity. The ensuing clash between two cultures leaves thousands of unarmed Inca troops slaughtered and sparks an intense battle of wills between the sun-god and his captor, as the Spaniards plunder for gold.

Peter Shaffer's spectacular epic sweep of a play was the first new work to be staged by the National at the Old Vic in 1964.

Review by John Thaxter for The British Theatre Guide (May 2008)

Peter Shaffer's exotic piece of 'total theatre', first staged at the Olivier in 1964, now looks like a poke in the eye for the rigid Christian ethic of the Conquistadors in Peru, coupled with imperial plunder as Francisco Pizarro's ramshackle army crosses the Andes in a desperate search for gold - turning fine Incan works of art into gold ingots to line their knapsacks and the Spanish royal treasury.

When it was revived at the National a couple of years ago some saw it as a contemporary metaphor of American oil greed in Iraq. But the Incan emperor Atahuallpa is no Saddam Hussein and the intellectual love affair between Pizarro and this self-styled Sun God is more about the mystic meaning of life and death, than conquest and regime change.

Downstage is a collection of box-like structures to represent the Andean rocks and an Incan habitat, all caught in the tightly-focused precision of Simon Roose's lighting plot, cleverly picking out essential moments on a stage often crowded with Peruvian natives, Catholic priests and the idle Spanish soldiery. Strobe lighting for the village battle and bloodbath was used with restraint.

The production, presented as a Gala event, is the 100th by Youth Action Theatre. With its close link to Teddington Theatre Club, the company was founded by Eric Yardley back in December 1970. And before he retired in 2004 Eric had directed no fewer than 73 of its major shows.

Since its inception, YAT has provided free opportunities for any young person aged between 16 and 25 to acquire or enhance acting and theatre skills by participating in the regular drama workshops and on-stage performances. YAT now presents some three or four productions a year, between running the workshops and media-based activities.

Shaffer's play with its challenging demand for a 30-strong cast (and almost as many again backstage) is a natural for a youth company of mixed ability but with a huge enthusiasm to get involved, plus a dozen adult members in support who share their dedication to the company.

For a play with mostly male characters it was inevitable that half the masculine roles would go to girls in the company. But never once did I sense a moment of gender confusion. Charlie Lowry-Corry in particular was a magnificent Hernando de Soto, second in command to Pizarro and looking all-powerful in her Spanish-inspired armour and helmet. A lovely performance.

Likewise were Hannah Patrice Ledwith and Miranda Marvin, figures of striking appearance who as Spanish priests carried the cross and Catholic insignia, not to mention the word of their God, with tremendous attack and conviction, representatives of the only true religion - but, more than that, winging their words to the back of the auditorium.

The leading Iberians were all chaps. Tall, elegant and clearly no stranger to the stage, Tom Kirkin was pitch perfect as the older Martin Ruiz, regretting his role in the destruction of a civilisation; while Miles Orru as his young counterpart revealed similar moments of compassion as the Spanish-Incan go-between and translator.

The central roles of Pizarro and Atahuallpa, one delivering long, reflective speeches, the other coping with the constantly changing demands for physical presence, were given performances that would not have disgraced a professional production.

I have never seen Rowan D'Albert before but his physical likeness to the popular image of Cervantes' Don Quixote, with a neatly bearded chin, gave him a head start as the impassioned but slightly dotty military commander with an angry streak of fatalism. And his nicely judged, demotic speech patterns perfectly suggested a man of the people, born a bastard and risen to fame and royal acclaim through his own dogged determination to succeed. Truly, a magnificent performance.

The role of Atahuallpa demands a powerful sense of spirituality coupled with a kingly understanding of practical politics; assured belief in his physical immunity from harm, while recognising the potential dangers of any developing situation - after all (as yet another bastard) he has killed his own stepbrother in a bid to seize the throne.

But despite the essentially unemotional manliness of the part, this sun-god was played with total truth by Anjum Dosaj, a dazzling female figure with strong features, who demands an inviolate space around her; her silky complexion and striking beauty bringing an almost ethereal quality to the portrayal, yet fused with droll humour and self-perception.

These two fine performances must have delighted director Compton, as they clearly did an enthusiastic audience, listening with close attention to the constant changes of fortune between these big-hitters. And they really showed us what Shaffer was banging on about when he wrote the play. Bravo!