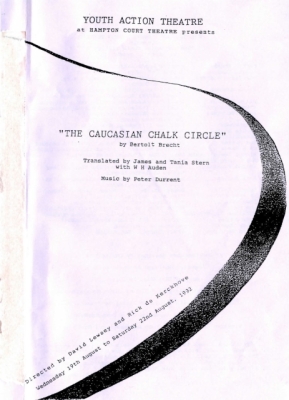 Written when Brecht was living in exile in lthe United States during World War II, THE CAUCASIAN CHALK CIRCLE is one of his most frequently performed plays. For the story, Brecht borrowed from an ancient Chinese tale -- echoed in the biblical account of the judgment of King Solomon -- in which two women claim the same child, but he subverted it into a parable advocating the idea that resources should go to those best able to make use sof them. Thanks to the rascally judge Azdak, natural -- though not biological -- justice is rendered, and lthe peasant Grusha, rather lthan the mother, gets to keep the child she loves.