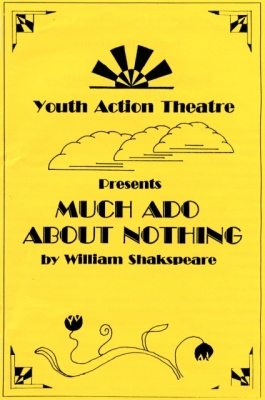 Much Ado About Nothing
by William Shakespeare

"When I said I would die a bachelor, I did not think I should live till I were married."

Four lovers kept apart by masks, underhand schemes, secrets and constant misunderstandings. Rapier wit and cutting observation; lies, laughter and love, with a stiff dose of betrayal and only a hopeless band of Constables to save the day. In one of Shakespeare's funniest and most irresistible comedies, Beatrice and Benedick pass the time goading and scorning each other until a cunning plan is devised to bring an end to the battle of the sexes. When they are finally thrown together to defend Hero's honor, their true feelings begin to be untangled.

Set outside Leonato's country villa, Don Pedro and his men return from war and prove to be entertaining guests for the Governor of Messina, his daughter Hero and Beatrice, his niece. The play takes us on a fast paced journey through weddings, funerals and masked balls, fuelled by plotting and confusion. In a society obsessed with appearance, nothing is as it seems? and everything is overheard!