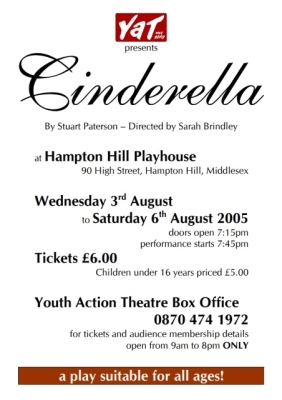 Do you think you know the story of Cinderella? Wicked stepmother, nasty stepsisters, handsome prince, fairy godmother? In this version of the classic fairy tale there are some alternative characters alongside the familiar and the events of the story are influenced by a modern Cinderella who realises what a girl really needs may not be a handsome prince after all.

"This spunky, radical version of the story produces one of the strongest, funniest and most effective pieces of children's theatre seen in years. Paterson's Cinderella is a prime example of his work, plundering the traditional fairy-tale material for it's most potent symbols, and yet challenging the assumptions on which it rests." --- Guardian