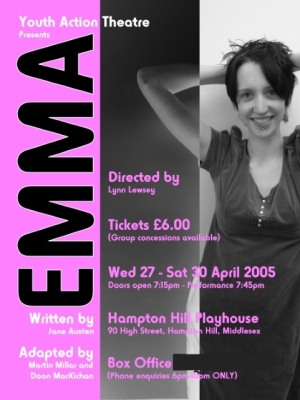 Unlike most stage adaptations of classic novels, Martin Millar and Doon MacKichan's Emma is unashamedly modern and lively. Jane Austen purists may not approve but despite the irreverent treatment the story is clear and provides a lot to enjoy and think about. YAT's production explores many "classic" themes while embracing the charm and beauty of the original work.

First presented at The Guilded Balloon Theatre for the 1998 Edinburgh Festival and subsequently toured in 1999.

"Most stage adaptations of great novels are deadly... In contrast this Emma is full of life and vitality. It is an unashamedly modern reworking, but despite the irreverence it is crystal clear that Millar and MacKichan love the book... There's no doubt this is an admirably lively, daringly provocative production that will give Austen fans a lot to ponder over and enjoy." -- Daily Telegraph.

First presented at The Guilded Balloon Theatre for the 1998 Edinburgh Festival and subsequently toured in 1999.

"Most stage adaptations of great novels are deadly... In contrast this Emma is full of life and vitality. It is an unashamedly modern reworking, but despite the irreverence it is crystal clear that Millar and MacKichan love the book... There's no doubt this is an admirably lively, daringly provocative production that will give Austen fans a lot to ponder over and enjoy." -- Daily Telegraph.

Review by John Roth for Theatre Magazine (May 2005)

Transferring novels to the stage always presents difficulties: they were, after all, not written for this genre, if we know the novel, we are never really going to be satisfied with a Stage adaptation; if we don't (and your reviewer does not), then it is going to take us a while to find out who everyone is and what they are doing. Doubling of parts, which happened here, adds to the confusion, particularly as many of the characters did not stand out as individuals, but were mere adjuncts to the action. In addition "Emma" is not, to my untutored mind, a very exciting piece; there are no real dramatic climaxes and it appears to peter out, rather than end: at least it did in this stage adaptation.

There was also the somewhat bizarre playing of male/female roles by two actresses. I thought at first that that this was a quirk of either the Writers or the Director, but then I discovered that there was a male shortage so, necessity being the mother of invention, Director Lynne Lewsey presumably adapted accordingly.

Having got that out of the way and, probably having offended Jane Austen fans, I will now say that the evening was an immensely exhilarating one, right from the opening chorus, and (not being a purist), I found the juxtaposition of 19th and 21st Centuries totally acceptable. The production had a tremendous attack all the way through, and the discipline was noticeable. The set, acceptably sparse, lent itself to some fine choreography and moreover gave the lighting technicians a field-day to which they duly rose. The music used was most apt, so the overall impression was a blending of two worlds, which, on paper, should not work, but it did. If I have a criticism at this point, it is that I would have liked the pace to slacken a little at times in the first act, so I could work out what I had seen, before being plunged headlong into the next episode. Things settled in this respect in the second act, which had more variation of pace.

There were two star performances: Michael Bishop takes the first bouquet for perfectly timed and carefully studied comic performances. He created "characters" which not everyone else did - even the few minutes as the Gipsy were different to the other two. He stole the show, but (more importantly) he did not overdo it, despite the fact that a partisan audience on the last night, were clearly hanging on to his every line and movement.

On a par with him was Amelia Greco as Harriet. Again she created a character, had studied the text and brought out everything it offered: timing, expressions, nuances - they were all there - and she could move and dance to boot! Her body language, and her communication with the audience was a joy to behold.

Steph Mott played Jane Austen and Mr. Knightley - which I had difficulty accepting. It is an almost impossible assignment, but she is a capable actress, who has a strong, confident and clear delivery, and the stillness suited Jane admirably. However, she seemed, at times, ill at ease in the male role, particularly at the end with Emma. This is too intense a moment to be done with two females - even in this day and age. Surely we should have had a male as Knightley, but circumstances appeared to decree otherwise.

I have not in the past, been very kind to Trine Taraldsvik in my reviews, but she pulled it off this time: the glasses were wonderful, and her movements and fussiness were excellent. Despite occasional diction problems, this young lady has greatly improved and surely will continue to do so.

Caity Mayall has style and presence in the vein of Steph Mott. She gave us 3 characters, but they were very much the same: I would have preferred her just to play one part, since I am sure she has more to offer us that appeared here.

So to Emma herself: the lynch-pin of the piece. Emma Hancock had to sustain a lengthy part, half narration, and half action, which she certainly did without noticeably tiring, but I found her rather colourless - this may be a fault of the writing - and she did rush some passages, not using the text to interest us fully. I needed more variation, and more emotion because, by the end I did not really care about her.

I can't leave this review without paying a tribute to the "Chorus" - 4 young ladies, whose energy and attack drove us through the play. The same reservation I had with Stephanie playing a male sounds again with Natalia Joachim playing Churchill (and that is with no disrespect for Natalia), but the Quartet played excellently together and were firmly controlled.

A fascinating, if questionable, evening, and although it is not a reviewer's job to continue into the after-show celebrations, I feel it apposite to do so. As we know, the production ended with Eric Yardley's official "retirement" from YAT. Without Eric, there would have been no YAT; it has gone from strength to strength, and under its' new Committee this must surely continue. Although there is inevitably a "floating population" as there is in TTC (and other societies), the main aim remains: to involve the young in Theatre, to bring them together to present Theatre, and to train them for the future. Eric deserves as many accolades as it is possible to award him. Truly, "he doth bestride the narrow World like a Colossus".