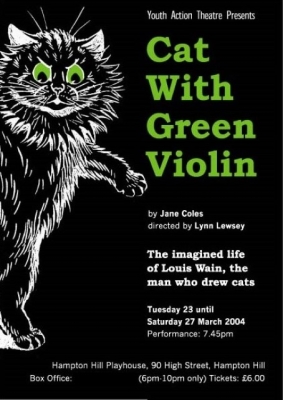 At the height of his success, Louis Wain's comical cat art had made him a household name. Children loved his annuals and adults were charmed by his amusing cartoons. In private he was slipping ever deeper into the darkness of schizophrenia. Haunted by his tragic past and constantly short of money, Louis was finally committed into hospital care in 1923.

Cat With Green Violin by Jane Coles is the story of how this popular social eccentric fell into obscurity, and explores how his mental condition affected the lives of those who loved him.

The imagined life of Louis Wain, the man who drew cats.

Review by Lucy Oldham for Richmond and Twickenham Times (April 2004)

Youth Action Theatre (YAT) displayed some intense drama at Hampton hill Playhouse, with their production of Cat With Green Violin.

The play's intriguing title is also that of a painting by artist Louis Wain, who died in 1939. Wain became a household name with paintings of comical cats that charmed adults and children, but privately schizophrenia was progressing and he was committed to hospital care in 1923.

In 'Cat With Green Violin', local playwright Jane Coles has explored the artist's life with his five sisters and how a popular eccentric fell into obscurity. YAT presented the tale on a dramatic red and black set and successfully transported us between bleak scenes at Wain's home to his colourful experiences in London's high society. Despite dark themes, the cast provided plenty of energy and extracted delightful humour from the script.

Tom Wright was outstanding as Wain; he spoke in a strange, morose manner that never varied even when delivering witty lines. A wonderfully subtle oddness was portrayed and you were never sure if he realised he was being humorous. Many comical lines came from Wain's obsession with cats and his passion for cake - a fierce argument with his sister provokes him to warn: 'Don't shout in front of the cats.'

Afterwards I felt the script left me with a plethora of unanswered questions: why did Wain keep his sisters locked away at home, was he scared their own creative talents would find more success? And what happened in Maria's past, was she actually raped at the beach? Did this contribute to Louis' illness, as well as her own? And how did their parents die? But perhaps all these questions simply added to the play's fascination.

There was certainly nothing missing from YAT's intelligent ensemble piece. It ends beautifully with the whole cast moving in time around the stage while holding empty wooden picture frames, as the tortured artist passes away in this fittingly strange and dreamlike scene.