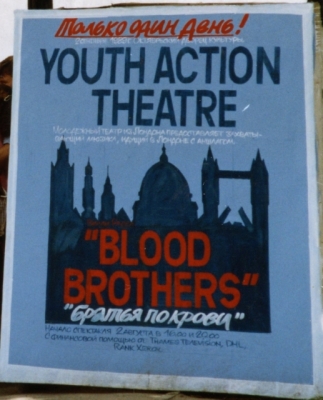 YAT's Summer production in 1989 was historic in every sense. Having been granted special permission to perform Willy Russell's 'Blood Brothers' whilst the show was still being staged professionally at the Noël Coward Theatre in the West End, Eric Yardley, Jean Goodwin and Richard Eliot spent months organising and planning one of the most memorable YAT tours to date.

The trio set off to meet with the Theatre on Podol group in Kiev in May 1989 and an agreement was made that YAT would travel to Kiev to perform at their theatre in August/September of that year and by way of return, the Russian troupe would visit the UK in March 1990 and perform at the Hampton Court Theatre.

In 1989, Kiev was still part of the USSR and behind the 'Iron Curtain', so any tour into this region was going to require meticulous planning with visas, passports in triplicate and careful allocation of funds. Even with all this planning, nothing could have prepared the thirty cast and crew that arrived in Kiev for the news that the planned six performances at 750 seater Theatre on Podol were being reduced to just two and the venue was being changed to the 2,000 seater Palace of Culture. In true YAT spirit, the cast and crew rose to the occasion and the show was a huge success, playing to around 3,000 people!

Of the day of the two performances, Eric wrote, "This moment was memorable. I was standing alone in this huge glittering auditorium, nobody else to be seen. Standing alone and feeling very alone. The stage was dark and empty, the cast all below changing. Way back, at the back of the auditorium, I could see a small lit window to the right and through it see Jean [Goodwin], head bent over her lighting plot. On the other side a similar lit window and Richard Eliot standing arguing with his Soviet technician. There was an eerie silence, suddenly broken by a piercing bell and stop. Then as I looked up, doors burst open, high in the balcony, in the dress circle at the back and sides of the stalls and the audience poured in from all directions. Poured in and filled, this vast space.

So we performed in the afternoon - and so again in the evening to an even larger audience. There were probably more than three thousand people at these two performances. They appeared to understand the play, they read the synopsis in the programme avidly as I walked amongst them during the interval and they gave loud and generous support at the end - with flowers being presented by enthusiastic supporters to the leading players. And just as suddenly, it was all over but not without the cast feeling very emotional. And so did I."

Sadly, no review of the production was ever written, at least not one we have seen! Instead, we have tracked down and scanned in Eric's reports from around this time. These documents make for facinating reading and we wish to share them with you. Please feel free to click below and download them. You will require Adobe PDF reader or a compatible application to open them.