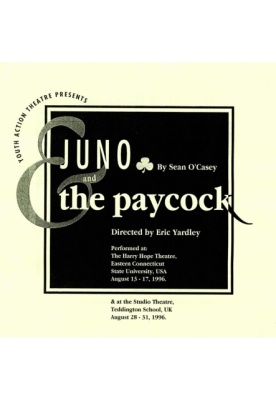 YAT's Summer 1996 production took us back to the Eastern Connecticut State University, USA for the first two weeks in August. In addition to the sheduled run, we also held workshops based on trust and improvisation. Once we had returned to the UK, we gave four performances in Teddington, Middlesex.

Juno and the Paycock is set against the turbulent background of 1922. Following the granting of Home Rule for Ireland and the setting up of the Irish Free State as a member of the British Commonwealth, Civil War broke out between the Republicans & the Free Staters. The play is full of "rich" characters - The Boyle family, living in a two room tenement building in a Dublin Slum. With it's wealth of humour & tragedy, you'll laugh & cry with these marvellous characters.

Juno and the Paycock
by Sean O'Casey

Review by George Allan for The Hounslow Chronicle (September 1996)

Put very badly, the plot of Sean O'Casey's early masterpiece, Juno and the Paycock, can be summarised as the disintegration of a slum-dwelling Dublin family as a result of the civil war in the newly-created Irish Free State, in 1922.

But that is to tell only part of the story, because in most of his work there is an undercurrent of sacrifice in support of a principle and the opposing attitudes of men and women to the ideal.

In his direction of the play for Youth Action Theatre last week, Eric Yardley reflected both of these aspects, and added to it a relishing of the joyous rhythms of Irish speech as well as an understanding that if we accept the play at it's charming face value, we belittle it and our selves.

The most impressive quality of the production lay in the fact that one tended to forget that these were young actors in a theatre classic and to see them as real people - which is a tribute to their understanding of the author's idiom as much his skill.

That the matter of accents and the sustaining of them failed to be a problem are further feathers in the caps of all concerned.

Of course, there are the three starring roles in this play - the eponymous Juno Boyle, her Paycock husband Captain Jack and his venal and parasitic friend Joxer Daly - yet such was the strength of the ensemble play that one was always concious that they were an integral part of the world of the tenement building and the city outside.

In this way, the genuinely comic as well as the tragic sides of the drama fitted together with the everyday drudgery of life perfectly in a setting by Christine Osborne that was admirably judged for content and style.

The lynch pin of the drama is Juno, and Maria Gale caught to perfection the blend of strength, realism and fatalism that must imbue most Irishwomen as much today as it did then - this was a remarkably fine realisation of the character and she was given an admirable foil in Steven Peter's Jack, displaying all the hedonistic weakness as well as the guileless charm that must have attracted Juno to him in the first place.

There was a deep darkness to Stephen Hogben's portrayal of Joxer. At first I was irritated by the apparent stereotypical poses he adopted, but as it went on I became more convinced that this was a concious act by the character who in many ways is the most cynical of all in the play as well as being something of a deus in machina.

Tania Foley and Jerome Phelps were both very fine as the younger Boyles, and there was a deeply affecting portrayal by Emma Donaghy of Mrs Tancred, a woman whose son had been murdered in the strife.

YAT has just returned from a visit to the USA with this play, and I trust that it was just as well received as here, for it's balance of poignancy, anger, comedy and sheer compassion - all the hallmarks of a great production.