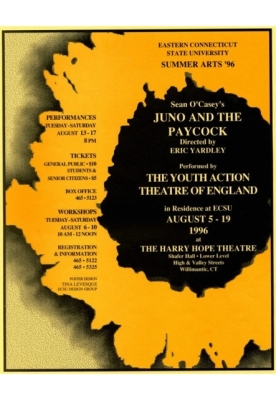 YAT's Summer 1996 production took us back to the Eastern Connecticut State University, USA for the first two weeks in August. In addition to the sheduled run, we also held workshops based on trust and improvisation. Once we had returned to the UK, we gave four performances in Teddington, Middlesex.

Juno and the Paycock is set against the turbulent background of 1922. Following the granting of Home Rule for Ireland and the setting up of the Irish Free State as a member of the British Commonwealth, Civil War broke out between the Republicans & the Free Staters. The play is full of "rich" characters - The Boyle family, living in a two room tenement building in a Dublin Slum. With it's wealth of humour & tragedy, you'll laugh & cry with these marvellous characters.

Juno and the Paycock
by Sean O'Casey