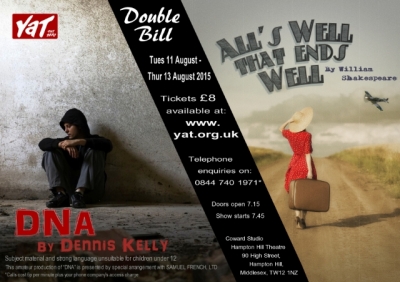 A one act play that explores gang culture, bullying and leadership. A group of teenagers watch one of their group fall to his death and set about a cover up to avoid getting the blame. As the investigation unfolds there are many unexpected twists and turns and we watch how the pressure and decisions to be made effects the various members of the group. Written just seven years ago it has already become a set text on a number of GCSE and A level drama syllabuses.

PARENTAL ADVISORY - DNA contains subject material and strong language that is unsuitable for children under 12.

Helena is in love… Bertram is indifferent… And so begins one of theatre's greatest romances. Shakespeare offers a masterclass in the comic study of romantic ambition and class distinction as Helena eloquently plots and conspires using intelligence, resourcefulness and feminine wiles! All's Well That Ends Well shows strong women winning the war of the sexes as they use wit and wisdom against foolish and frivolous men. Set against a backdrop of the Second World War, this abridged production is filled with comedy amidst the battle of realising true love.

YAT's latest production in the studio was a stimulating double bill of a contemporary one act play, DNA by Dennis Kelly, followed by a preview of this year's YAT offering at the Edinburgh Festival, an abridged version of Shakespeare's All's Well That Ends Well.

DNA was originally written for the National Theatre's Connection Project, which invites leading writers to produce plays for young people, and was performed at the Cottesloe in 2008. The play explores the problems of teenage gangs, bullying, peer pressure, group dynamics and adolescent cruelty. The writing was sharp, reflective and the lines were delivered in a fast style reminiscent of a Mamet play. The play starts with a prank that goes wrong, with tragic results, after which the teenagers panic and decide to cover the whole thing up. This leads to a series of further chilling events but ultimately they find their cover-up has united them, bringing a semblance of order into their fractious lives.

Rick de Kerckhove's firm direction delivered a convincing, thought-provoking and unnervingly realistic portrayal of the power of teenage group mentality. The cast were focussed and presented this short play with power and realism.

While very much a dark play there were lighter moments that lifted the mood to stop it becoming too morbid ('I can't get involved in this. I'm going to be a dentist!’).

Central to the piece were the two protagonists, Leah and Phil, who sat side by side on a bench and provided much of the sardonic humour. Matilda Wood as Leah captured the awkwardness of a frustrated teenage girl trying to engage with her moody and silent friend Phil (played by James Parker) in a series of rambling yet endearing monologues. In one such monologue, outlining the writer's views about bullying, she cites one of man's nearest relatives, the bonobo, and says, 'Chimps are evil. They murder each other....they kill and sometimes torture each other to find a better position within the social structure'.

There were a number of engaging performances, especially Diany Samba-Bandza's Jan whose monologue was beautifully executed and very atmospheric. The use of lighting was most effective here and congratulations to the lighting team of Michael Bishop and Meg Herd and indeed to all the backstage team.

There were many other performances to admire, particularly Caroline Gudge as Annie on her bedraggled emergence from living in the woods. The rediscovery of Annie was a pivotal moment in the play as the group were torn between relief for her safety but fear for their own futures given Annie was no longer 'dead'.

This was a thought provoking play, tightly directed and full of well observed performances. Well done to everyone involved.

Following the interval, was an abridged version of All's Well That Ends Well, prior to its journey north. I have to congratulate Elizabeth Lattimore and Sarah Dowd for directing this condensed version of a five-act play into 50 minutes without losing too much humour or plot.

Labelled one of Shakespeare's problem plays, so-called because it cannot be neatly classified as tragedy or comedy, this version proved far from problematic. Because so much plot is crammed into less than an hour, the play by necessity had to move along at a breathtaking pace which was quite exhilarating. The directors chose to place their version rather audaciously in the 1940s and, although Shakespeare's tale takes place in France and Italy, the mood was distinctly British and we were transported into an atmosphere very much set in the era of the London Blitz. Indeed, the audience enters to a rather cosy scene of couples smooching on a dance floor which instantly sets the 40s atmosphere. Congratulations must go to the costume and hair styling team whose work was excellent. The set, consisting mainly of two floral arches, was simple yet effective - especially important given its transit up to Edinburgh and an inordinately short time in which to set up and strike the set at each performance in Edinburgh.

As for the performances, there were many to enjoy. Bertram was played by Josh Clarke and I have to admit how we ladies tend to dislike Bertram regardless of how handsome he is. But there again, we can't help having a soft spot for this handsome cad and Josh managed to make Bertram likeable enough to help persuade us that perhaps his motives in disdaining Helena were not all bad. He played the reluctant suitor spot on.

Sarah Collins-Walters gave a skilful portrayal of Helena displaying a cunning yet deceptive innocence while her guardian, the Countess, played by Lucy Hanneghan managed (despite her young years) to display the authority and believability of this character. I especially enjoyed her scenes smiling with the dilemma of how to deal with her son and being warmed by the glow of occasional tipples of wine served by her steward, a small cameo role played by Sam Clunes, who had a great delivery and conveyed his scenes with a nice understated humour.

Liam Hurley as Parolles, the man of words, gave a mischievous swagger to this cowardly braggart and he acted with a great sense of fun. I also liked the authority (especially difficult in youth theatre) of James Rooza's King and especially his reactions to those around him - his lines were delivered clearly with good emphasis and meaning - as indeed were those of Benedict Lejac who provided an excellent Lafew.

I also enjoyed Emily Moss as Diane as she manoeuvred the situation to her own advantage - a very believable performance as she tricks Bertram into sleeping with his lawful wife. Also, some good support from Natalie Standing playing Diane's widowed mother. There were some excellent supporting performances by the 'Lords and Ladies', especially the scene where the girls strung out their washing while chatting and giggling like a group of schoolgirls.

All in all an excellent show and, while I thought this abridged version kept the plot intact and rolling along at a great rate of knots, I have to say some of my companions, less familiar with Shakespeare's works than I, were somewhat puzzled by the plot and even failed to grasp the fundamental 'bed trick', the 'ring trick' and even failed to understand the nature of the reward granted by the King to Helena. This started to make me wonder if, for those seeing the play for the first time, the abridged version had been pared down too much and had created difficulties in following the plot and in understanding the characters together with their relationships and motives. Perhaps a short synopsis in the programme may have helped.

However, from my own point of view I found this to be a most enjoyable production with many fine performances. All good wishes for a successful week's run in Edinburgh.

Over the years Youth Action Theatre has consistently succeeded when TTC has sometimes disappointed. Their latest double bill, prior to their appearance at the Edinburgh Festival, goes someway to explaining why.

There is much to get our critical teeth into in the greatly abridged version of Shakespeare's All's Well That Ends Well but the staging, delivery, enunciation, reaction, were all pretty faultless and word perfect. Unlike many TTC productions, this was definitely a case of books down before rehearsals. We had no problem hearing the words and all the parts were beautifully characterised. It was like a final year drama showcase of young actors preparing to go pro and was very slick.

DNA by Dennis Kelly is a compelling 45 minute piece of inner-city gangs making some bad decisions and descending into a sort of madness - underscored by Caroline Gudge, who appeared Ophelia-like at the end. The 13 strong cast was miraculously moved across our small studio space by director Rick de Kerckhove and expertly lit by Michael Bishop. DNA is not going to the Edinburgh Festival and there is a different 16 strong cast for All's Well. Have so many actors ever appeared in our studio in one evening?

The 60 minute adaptation of All's Well That Ends Well - the length dictated by their Edinburgh venue - worked well in that it told the story in a wartime London setting. The fact that France and Florence were mentioned throughout didn't detract for me. It began in houselights with the cast dancing to Big Band music. An air raid siren cleared the stage and then lights up. A very slick opening!

The king (James Rooza) had a commanding enunciation and the Countess (Lucy Hanneghan) impressed greatly with a lovely touch of comedy when she had too much to drink before receiving the distasteful news about her son. Throughout, she showed what could be done with this marvellous part.

Of course, the play is really about the two on/off lovers, Helena (Sarah Collins-Walters) and Bertram (Josh Clarke). Their evolving relationship suffered from the fast pace adopted but it is to their credit that they convinced me with their performances - but then I know the play. I wondered whether those unfamiliar with the play would have seen these as the central parts.

There was good ensemble work from young men in army, navy and RAF uniforms and from the girls in their utility frocks. At one point the latter exploded onto the stage to view the oncoming army, which made me jump and laugh at the same time - characteristically slick.

I missed the Parolles subplot which was mostly cut. Well, you can't have everything in an hour! In many ways it was a shame because the actor playing Parolles (Liam Hurley) got his character just right, even in the reduced part. He would have been excellent in the full part. In his RAF officer's uniform he looked like a young Dickey Attenborough - casual and rebellious. In fact, all the cast were so in the period that it was like eavesdropping in on Lime Grove Studios in the 1940s - more filmic than stage, perhaps - with much credit to directors/designers Elizabeth Lattimore and Sarah Dowd.

Finally, a comment more than a criticism. YAT has certainly let the upper age limit slip since my days with them. Eric Yardley used to grab members before university, now they all seem to be graduates. This goes some way to explain their confident approach to their work but I hope it doesn't prevent younger members from shining in this premier establishment.