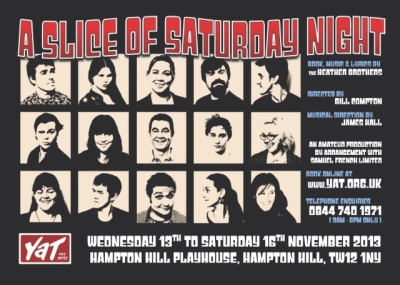 Everyone is talking about 1963. 50 years since the start of Doctor Who, 50 years since JFK's assassination and 50 years since teenagers would work and save all week just for that one Saturday night out. Travel back in time with YAT and experience just what it was like to fall in love all over again.

"a pleasurable, lightly satirical revel in Sixties manners and music ... with bite, kick and hanky-panky." -- Guardian

"The Heather Brothers' musical spoof on the Saturday night rituals of pubescent 17-year-old delinquents in the 60s is full of such clever, self-mocking charm that it's difficult to come away feeling anything but thoroughly entertained ... the real pleasure comes from the Brothers' shameless poaching of an electic cross-section of famous 60s numbers - Cliff Richard and The Shadows to Bob Dylan via The Beatles ... superb comic pastiche and sharp, cuff-link humour." -- Time Out

"A Slice of Saturday Night is a musical pastiche that takes you spinning back to the Swinging decade to celebrate the etertnal embarrassment of teen age ... girls in mini-skirts and boys in Chelsea boots sing songs about teen trauma that sound like all those 60s hits you've heard on retrospective shows." -- Whats On

A Slice of Saturday Night
by The Heather Brothers

On entering the auditorium you were immediately transported back to the Seedy clubs of yester year tatty walls and a smoky atmosphere.

After a brief visit down memory lane by the old man and his grandson and a sound bite from Doctor Who’s Tardis (Very Apt) and we were back in The Club A Go Go and greeted by Eric Rubber Legs De Vene, the club owner played by David Hannigan. As the cast piled in all dolled up for their one and only night on the town for the week, you could almost smell the cheep aftershave of the boys so desperately on the pull and at the same time really feeling for the girls who were looking for Mr Right.

The set worked well for the space just like the Cavern Club with the band set up at the back and part of the club with a clever twist of managing to turn one part of the set  into the inside of the men’s toilet which staged some very funny scenes.

All the predictable characters were there Gods gift (Gary) The Slime ball (Eddie) and the Virgin (Rick) to the girls Hard to get (Bridget) and a Sandra Dee character looking for love (Sharon).

All the cast looked splendid and really authentic in the 1960s clothes of the time with hair and make up adding to the allusion. One girl looked so like Twiggy it was spooky (Rita!)

The songs were in the most very clever and very catchy with some really funny tunes such as “Seventeen and Never done it”, and another very naughty look at “Premature ejaculation”!  Performed by Gary’s Character, who up until then you believed he was god’s gift and would never have an issue in that department. Unfortunately some of the really funny individual lines within these individual songs were drowned out by the band which was a shame although I believe it wasn’t the level of the band who were excellent, more the level of the mics?. The singing both Solo and groups were good and sometimes excellent and in some cases the tunes had a familiar ring to them. There were also some excellent, mature performances from the very talented cast.

The pace was fast and very sharp anchored together beautifully by David Hannigan who had quite a few of the 31 songs in the show! I also thought it was a nice touch to do the flash back sequences which put the show into context.

I loved that the cast interacted with the audience before the beginning of act two and the fact two unsuspecting members of the audience were dragged up onto the stage was hysterical. You could also see how much they were all enjoying the experience which was infectious to the all of us in the audience.

Everyone around me really enjoyed including my fifteen year old son who is hard to please at the best of times. Now in the decade of mobiles, Facebook and more freedom the  girls and guys back in the 60s would ever know, you still came away certain that in one way or another all generations of teenagers go through these trials and tribulations what ever the era!

Well done to Bill Compton, James Hall and all the cast and crew of this excellent production, proving once again that YAT are such a wonderfully talented bunch of young people.