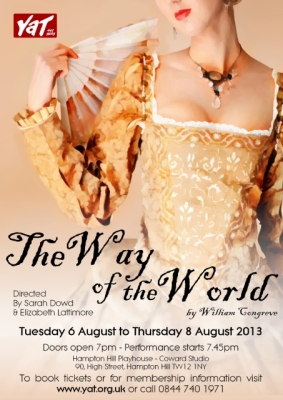 Widely regarded as one of the best Restoration comedies, this sharply written play entwines lovers in a tangled web of plotting, fortune and honour. YAT's energised production follows two lovers as they endeavour to marry against all the odds. But first they must navigate the twists and turns of conspiracy, deception and intrigue, not to mention winning over the tyrannical Lady Wishfort. The ways of their world must be conquered if true love is to win over all.

The Way of the World
by William Congreve

Two productions from YAT within a month demonstrates the strength of this affliliated young group which grown from strength to strength.

Prior to travelling up to the Edinburgh Fringe Festival the older members of YAT showcased their production of a clever adaptation of Wycherly’s consummate, if bewildering restoration comedy, The Way of the World,  by Lizzie Lattimore and Sarah Dowd.  What a talented pair they are.

I am sure Mr Roth has minutely dissected this production with his acknowledged expertise so there is probably little I can add except to say that I made a note of three words on my programme during the evening I attended:  pace, attack, panache.

The performance constraints at Edinburgh are that no production should take longer than 55 minutes.  Thus the pace that these young actors injected into the performance was essential.  Not only was the text well-delivered, but all the actors looked gorgeous.  The tall young men-about-town were elegant in their frock coats and the girls were delightfully bosomy in their low-cut gowns.   (I’m not jealous).

I have reviewed Confusions elsewhere in this edition of Theatre, but I must confess I left this production as much, if not more, confused than I was earlier earlier in the month. I have seen several productions of this entertaining early restoration piece and I had even done my preparation homework via Wikipedia!

So I was looking forward to a lively evening’s entertainment and was not disappointed.  I chuckled all the way through.

Again YAT showed the way restoration comedy can be performed.  Let’s hope some of these actors audition for the forthcoming production of The Country Wife next January when Mr Roth directs for the parent company.