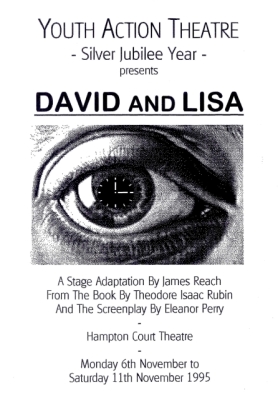 First a much-admired novel by the eminent psychiatrist, Theodore Isaac Rubin, then a screenplay by Eleanor Perry from which was made the award-winning motion picture, David and Lisa has now been adapted for the stage with the utmost fidelity to it’s illustrious prototypes.

It retells, by use of the most modern stage techniques, the strange, appealing and utterly fascinating story of the two mentally-disturbed adolescents: David, only son of wealthy parents, over-protected by a dominating mother, who is tortured by his mania against being touched; and Lisa, the waif who has never known parental love, who has developed a split personality and is in effect two different girls, one of whom will speak only in childish rhymes and insists upon being spoken to in the same manner.

The play follows them during the course of one term at Berkley School, where they have come under the sympathetic and understanding guidance of psychiatrist Alan Swinford and his staff; follows them through exhilarating progress and depressing retrogression; follows them - and their fellow students: Carlos, the street urchin; the over-romantic Kate; Bulimic Sandra, unloved and unwanted by her glamorous father and step-mother; and others - with laughter and heartbreak and suspense, and with the continuous absorption of an authentic and well-told story about problems that are totally unfamiliar to most of us.David and Lisa
by Theodore Issac Rubin
Stage adaptation by James Reach