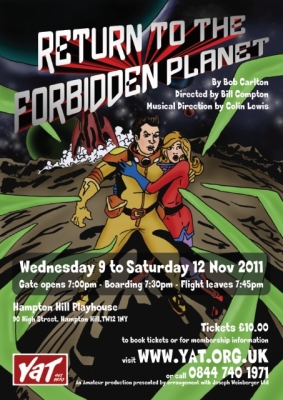 The plot follows the crew of a routine survey flight under the command of Captain Tempest. Their spaceship is drawn mysteriously to the planet D'Illyria where mad scientist Doctor Prospero and his lovely daughter Miranda are marooned.

Return to the Forbidden Planet is a Jukebox musical by Bob Carlton based on Shakespeare's The Tempest and the 1950s science fiction film Forbidden Planet (which itself drew its plot loosely from The Tempest). This exciting high energy Olivier Award winning show (best musical for both 1989 and 1990) features a collection of 1950s and 1960s rock and roll classics and will be performed in the Main Auditorium in Hampton Hill Playhouse. It promises to be a show not to be missed!

Come and support our multi-talented cast...

...and our superb backstage team...

Return to the Forbidden Planet
by Bob Carlton

Return to the Forbidden Planet was nominated in two categories at the artsrichmond Swan Awards for Drama and Musicals 2011-2012:

The production went on to recieve two awards:

Best Design
"This was a setting with pizzazz! As part of an all-embracing design concept which included the programme and tickets, Bill and Catie's set extended into the foyer, bar and auditorium. A striking futuristic feel was punched home with moving lights, display panels and lots of aluminium!"

The Wild Swan
"for the whole team who created the effects for the appearance of the Monster - A real coup de theatre!"