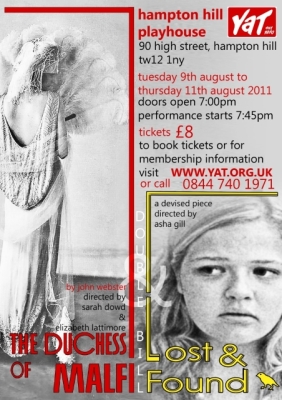 In a dusty forgotten junk shop a young girl wanders around looking for her Lula. With the help of the shops pet bird Rutherford, they shift through the clutter together, trying desperately to find the mystery object which means so much to her, unaware of the history that lies behind each object that they find. This imaginative, humorous and often touching piece of devised work is written by Asha Gill with the help of her brilliant cast.

The Duchess of Malfi
by John Webster

A Jacobean drama that starts as a love story with a Duchess who marries beneath her class, and ends up in a nightmarish tragedy as her two brothers exact their revenge. Decadence and Decay is the theme behind YAT's exciting new production. This group of talented young people will transfer the renaissance world of the Duchess of Malfi to the roaring Twenties where corruption and deceit are rife and the Duchess' downfall awaits her.

I have often found, over the years, that you can build up expectations of something you are intending to see or experience, to the extent that the finished product never quite lives up to what you imagined. Conversely, you can approach something that you basically feel cannot really work, nor come up to your expectations, and then find out how wrong you were. These last were my initial thoughts on a 50-minute “Duchess of Malfi”, performed by YAT in the Coward Room, and I was delighted to find out how wrong I was.

Webster’s great play has long been a passionate favourite of mine, and the first thing I must say, knowing that it had to be cut, is how skilfully this was done. The story moved swiftly and was understandable, without anything really vital being missing.

The Coward Room does not lend itself to much in the way of choreography, but by using the full length of the room, and basically a bare stage, Directors Lizzie Lattimore and Sarah Dowd created some excellent groupings; moreover, they kept up the play’s momentum, in that there were no pauses in between characters going off and others coming on: this is necessary in most plays, but even more so in Elizabethan and Jacobean plays, in that we need to be swept along with the action, and not to pause and think “hang on…!”

Before turning to performances, I must also compliment the Directors in that the cast spoke the verse extremely well. There are some splendid such passages in this play, given full rein, and – most importantly – we understood what they were saying, and why they were saying it.

The finest part is that of Bosola, and as soon as I saw that Antony Atunes was playing this part, I knew I was in for something good: I was not disappointed. Antony always seems completely “at home” in whatever he does - Bosola is a complex part, a malcontent who turns from killer to avenger, basically due to a feeling of lack of real identity. His detachment in this respect, and his search for himself (which he never finds – his is “another voyage”) should, and did, make us understand him even if we cannot feel anything towards him.

Both Jason Evans (Antonio) and Conor Moss (Delio) were well played, in that I believed in their relationship: this is important, since, in Jacobean Plays, there is usually a “companion - confidante”, who supports and guides the main character, and whom we must warm to, and not just view him as a necessary foil to the plot. Connor completely achieved this, and Jason played Antonio straight with no frills, which is exactly as it should be.

The Aragonian Brethren are widely contrasting characters, and I have to say, at this point, that I would like to have seen Tom Wright and Michael Bishop cast the other way round. Michael is a good actor, but did not quite convince me of the lunatic and incestuously obsessed Ferdinand. He starts the play with a screw or two loose and more get added as we progress: I needed something a little more increasingly manic throughout. Tom began superbly as the Cardinal, but towards the end of the play, he became a little too melodramatic, and I needed to see more signs of his ultimate collapse (to this end, dare I say that the 4 fishpond lines in V.5 should have been kept in?) and his death scene suffered in this respect: also, why not keep him in his Cardinal’s robes throughout? The cord jacket did not work.

Holly Munson’s Duchess shone with a great radiance, and grew in maturity to the final dénouement, where she achieved true tragic status; the more we recognise the Duchess as a young woman in love, as opposed to a “grande-dame” which she is not, the more horrific that dénouement is, if it is played with total control, which it was, since her control is contrasted with Ferdinand’s mania.

Two further splendid female performances were those of Becky Lewis as Cariola who was a worthy companion and foil to the Duchess, and Stephanie Von Wiera as a scarlet, sexy Julia; her final scene, when poisoned by having kissed the book, was excellent: like all Julias, she went, she knew not whither.

Does the play work in the 1920’s? Going back to my opening paragraph, I was prepared to say “no”: the play’s basic content is surely the misuse of power, revenge, the status of women and the consequences of their attempted assertion of authority in a patriarchal environment. This is pretty timeless stuff, and all I am going to say is that, for me, it did work in this period, simply because the Directors and actors were faithful to the concept.

And so to the play which, in fact, opened the evening: “Lost and Found”. Here, I fear, I cannot dish out so many bouquets. I will begin with the play itself, if we can call it such, since I did form the impression that what we were watching was a series of scenes which had not reached a final version, and was “happening” as opposed to “being”: it was almost like listening to a Symphony merely from Beethoven’s Notebooks, not his finished article; lots of good ideas, but not a Whole. The life of the girl was incomplete (no mention of children, family?), and was episodic as opposed to dramatic.

What did not help was the lack of pace, momentum and dramatic contrast: it appeared to drift on, without moving towards a real climax: when the end did come and we realised that the Old Lady was the Girl, it was almost an anti-climax – or, at any rate, a sense of relief that something had been achieved.

However, there were many inspired production touches, a number of snappy and witty lines, plus four performances which rose above the production: foremost amongst these were Mark Williams in a variety of roles – his portrayal of the Schoolmaster made everyone sit up, and his subsequent characterisations had no less effect. David Gudge was a joy as the Liar, and has the makings of a fine comedian in that when he slurred over a line, he got out of it in splendid fashion, but he needs a little more discipline to really cement his obvious talent. Finally, Caroline Bradshaw and Luke Williams, both of whom have stage presence and careful control.

Sadly, the two performers who should drive the piece were not up to it. Mima Davey’s “Girl” lacked punch, and Magali Swift’s Rutherford appeared not to know a number of her lines, and cues. I am inclined to put this down to a directorial fault since Magali did display some potential.

I have, in the past, reviewed a number of YAT productions: in each, I have praised the commitment, the energy and the obvious talent that will hopefully transmit itself to TTC. I have not always been so enthusiastic over actual line deliveries by some actors, and have said so, but this has dramatically improved, and there were several moments in “Malfi” when I forgot I was watching a Youth Theatre. Keep this standard up, YAT, and go from strength to strength. I believe “Malfi” is going to the Edinburgh Festival – I wish it every success, and further wish I could travel up there to see it again.

THE DUCHESS OF MALFI