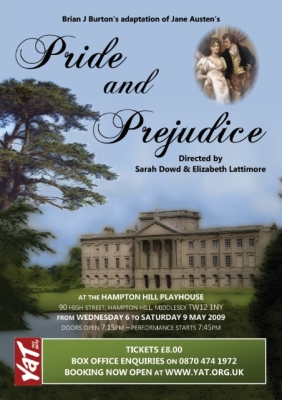 Following the five Bennet sisters as their lives are turned upside down when a wealthy young man and his best friend arrive in their neighbourhood. The production has been a vast undertaking for YAT, requiring a large cast to portray some of the most iconic literary figures ever written, but the group has grasped the challenge with their usual vitality and enthusiasm and it is proving to be thoroughly enjoyable rehearsal period!

Based upon Jane Austen's novel about five sisters in Georgian England. Their lives are turned upside down when a wealthy young man and his best friend arrive in their neighbourhood

Review by Heather Morgan for TTC's Theatre Magazine (May 2009)

It is a truth universally acknowledged that anyone reviewing a performance of the stage version of this literary classic will start off with this quotation. So, no apologies from me. It is, however, worth acknowledging the truth of the fact that the more young actors get to strut their stuff, especially on the stage at Hampton Hill Playhouse, the sooner they become mature and confident players of potential benefit to Teddington Theatre Club. I was very pleased, therefore, to be invited to review YAT's recent production of Pride and Prejudice in an adaptation by Brian J Burton.

Elizabeth Lattimore and Sarah Dowd shared the honours as directors, and demonstrated great skill in moving their actors seamlessly from scene to scene. They arranged some very attractive tableaux, especially in the dance sequences.

The clever set represented the tasteful interior of several different houses, with a beautifully painted backdrop of the grounds of wealthy estate, complete with temple, bridge and lake that might well have been designed by any one of the great landscape architects of the 18th century. I liked the grand staircase leading to a long landing across the top of the set above a drawing room, which served as the Bennet family's cosy living room, the ballroom at the homes of the various members of the squirearchy, to say nothing of Mr Darcy's stately pile.

The narrator, in the person of a beautifully spoken Jane Austen (Hannah Thomson), glided in and out of the scenes and was particularly effective when she stood on the landing, surveying and commenting on the activities of the characters she had created.

I was struck by the charming costumes and beautifully arranged hairstyles, the girls with their ringlets and the men in suitably neat, or in the case of Mr Collins suitably daffy, styles.

With an ensemble piece like this it is difficult to pick out individual performers, but I must mention Stephanie Mott as the frantic Mrs Bennet who delighted the audience with every appearance in an hilarious performance that was just the right side of over-the-top, while Barnaby Ferris (Mr Bennet) patiently observed her silliness. Stephanie Von Wiera, as Elizabeth Bennet, was delightfully demure in a long and demanding part and was charmingly partnered by aloof but romantic Chris Coiley as Mr Darcy. The five Bennet sisters all worked well together and made much of their cameo parts. Mr Bingley, played by James Cairns, was charm personified and Antony Antunes was suitably dastardly as Mr Wickham. Lady Catherine de Bourgh struck terror in the hearts of all she deigned to visit and was played with assurance by the petite but large-voiced Hana Patrice Ledwith.

So, congratulations once again to YAT for putting on a carefully detailed and well-orchestrated production in which the whole cast and crew evidently worked so hard. It was well worth the effort and must have been a great pleasure to participate in.