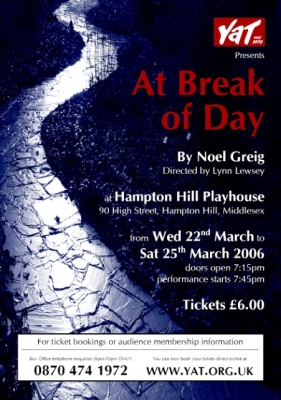 At Break of Day
by Noel Greig

At Break of Day is the story of two soldiers who make an epic journey after a long war. They travel through a whole century of conflicts and encounter many different characters on the road home. One of the soldiers records their travels in a notebook. Interwoven is the story of a girl who is tracing her great-grandparent by following clues in an old notebook. She encounters modern dangers while inhabiting the same landscape as the soldiers. Time and place shift alarmingly. Characters are haunted by the echoes of past hopes, disasters, poetry and sorrow.