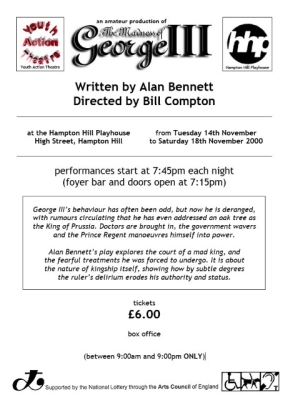 The Madness of George III
by Alan Bennett

George III’s behaviour has often been odd, but now he is deranged, with rumours circulating that he has even addressed an oak tree as the King of Prussia. Doctors are brought in, the government wavers and the Prince Regent manoeuvres himself into power.

Alan Bennett’s play explores the court of a mad king, and the fearful treatments he was forced to undergo. It is about the nature of kingship itself, showing how by subtle degrees the ruler’s delirium erodes his authority and status.

Review by Jenny Scott for Richmond and Twickenham Times (November 2000)

A strong cast of Youth Action Theatre members, under the sure direction of Bill Compton, staged a well-presented production of The Madness of George III at Hampton Hill Playhouse last week.

It was a great challenge for this youthful group and one which they met very successfully.

Alan Bennett's play had a long run at the National Theatre, transferred to Broadway, then the film version gained a string of Oscar nominations and Academy Awards.

What is known now, and wasn't in the 18th century, is that King George III had suffered from porphyria, which produced purple water not to mention the effects of insanity.

Bennett's astute dramatisation of the monarch's malady raises the question of what is normal behaviour for a king. Even when so-called sane, George III's behaviour is far from normal and Scott O'Brien in the role gave an endearing portrayal of a man with a great relish for life, despite his eccentricities.

As 'Mrs King', Dominique Crowley gave an engaging account of loving, wifely concern, while 'Mr King' was subjected to horrendous treatments and humiliations by his inept physicians. Mark Wren's implacable Dr Willis, who favoured intimidation and control as his method, claimed credit for the King's recovery which was merely coincidental. It was an illness which was to recur for many years.

Rosie Waters brought marvellous gravitas to her role as Prime Minister William Pitt, and a clear delivery which, even today, would have ensured her a hearing in the house.

As Prince of Wales, Anjum Dosaj, although lacking the historic weight, had the right degree of arrogance, befitting an heir to the throne well known for his excesses and conflict with his pa.

Representing the leaders of the opposition Whigs Charles Fox and Sheridan, Karyn Scott and Cheryl Stockman were suitably pompous as they schemed deviously with the Prince to usurp his father, who in fact lived to a ripe old age, although the PoW did eventually become Regent in 1811.

As pages dancing personal attendance on the King, Miles Orru, David Hookings and Adam Green as Papendiek, Fortnum and Braun made the most of some of the best comedy lines in the play as they became less respectful of their ailing monarch.

But the whole cast was impressive in conveying, with the help of Eileen Baker's costumes, the pomp and circumstance of court life. Sophie Vickers' set design was simple but very effective with its central flight of stairs providing for imposing royal entrances.