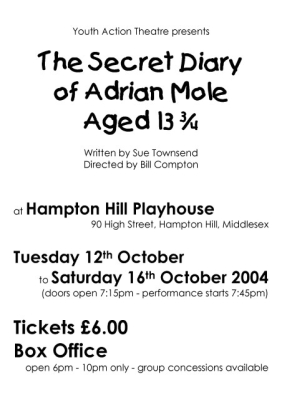 Adapted by the original author Sue Townsend, this comic play covers the first of the Adrian Mole diaries in which the Midlands adolescent and undiscovered poet and intellectual tries to deal with his parents' crumbling marriage, his spots, his school, his unrequited love for Pandora and the erratic behaviour of his dog.

All this whilst trying to get his poetry accepted by the BBC.

Review by Joy Manners for Richmond and Twickenham Times (October 2004)

INSPIRED direction of a highly talented and disciplined cast made the Youth Action Theatre's production of The Secret Diary of Adrian Mole aged 13 3/4 last week at the Hampton Hill Playhouse a pleasure to watch.

Written by Sue Townsend in the 1980s and set in Leicester it is full of gentle humour and wry observation of the people in Adrian's life.

The play had been cast with great care and most of the actors accurately met the author's descriptions. Curly haired Conor Strachan was the troubled hero, Adrian. He was completely convincing and his clear diction helped audience understanding of the play.

An only child, whose parents' marriage is dodgy to say the least, he gives a degree of order to a chaotic household. His snobbish father George, played by Tom Wright, cannot keep the affection of his feminist wife, Pauline, played by Trine Taraldsvik, who leaves him for the ardent next door neighbour, 'Bimbo' Lewis.

Adrian's problems are compunded by having to pay money to avoid being beaten up by the school bully Barry Kent and his gang.

Encouraged by the school to do some social work, he undertakes to care for an elderly invalid, Bert Baxter, play by Michael Bishop with an excellent Leicester accent. He has the help of the glamourous and clever Pandora, played with panache by Eleonor Hollington.

Two cameo performances of note were by Divyesh Thackerar as Headmaster Scruton and by Asha Gill as Doreen Slater, the 'other woman' in George Mole's life.

The ingeniously designed, sparse set was on two levels. In the foreground a settee indicated the Mole's living room. On a higher level at the rear were two bedrooms. In the left upper corner was Bert Baxter's house. The remaining space at floor level was used for the play's action scenes.

The 1980's music helped create a nostalgic atmosphere and spotlighting was used to great effect. Good use was made of mime in some scenes - this was particularly so in the menacing fight scene.

Strict attention was paid to detail in costume and props. Smooth entrances and exits kept a good pace going, difficult to achieve in a play made up of many small episodes.

Hearty congratulations to director Bill Compton for a highly entertaining realisation of an amusing play.

Seeing this play has caused me a personal dilemma. Should I buy the expensive hardback version of the new Adrian Mole book just published or should I wait for the cheaper paperback version?