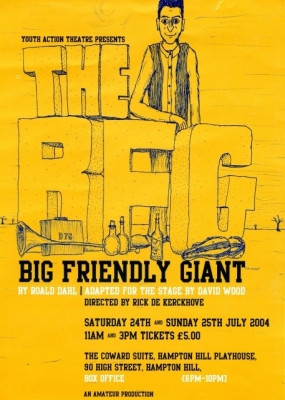 David Wood's adaptation of this classic children's story brings to the stage some of Roald Dahl's most memorable characters. A young orphan girl is whisked off by the BFG to giant country and into a magical adventure in the land where dreams begin. Assisted by the Queen, the army and the air force they combine to save all the children of England from the rampaging child eating giants Fleshlumpeater, Bloodbottler, Bone Cruncher and crew.

Suitable for children aged 4 and over.

The B.F.G.
by Roald Dahl
Adapted by David Wood

The BFG tells how a young orphan, Sophie, gets snitched from her bed and whisked off to Giant Country by the BFG, a 15-foot high giant with a jumbly way of talking. She narrowly escapes being guzzled like a whiffswhiddle by such nasty child-chewing giants as the Fleshlumpeater and the Bonecruncher.

With ingenious stagecraft the gaints and humans are portrayed in a range of physical scales, epitomising the atmosphere of dreaming that is central to the plot. Altogether a magical entertainment for all the family especially little children of 4 and upwards.