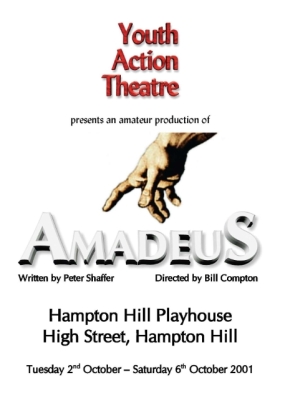 Set in the opulence and splendour of 18th century Vienna, Peter Shaffer's thrilling and often wickedly funny play pits blazing human ambition against heavenly genius. Antonio Salieri is exalted as the most famous composer in a city of musicians - that is, until the young Wolfgang Amadeus Mozart arrives. Now brutally confronted with the limitations of his own talent and believing God to have abandoned him, Salieri embarks on a desperate course of action.

"Amadeus may be a play inspired by music and death, but it fills the theatre with that mocking, heavenly silence that is the overwhelming terror of life" --- The New York Times

"Shaffer works out his tremendous, his colossal, theme in language of great strength - those who go to it prepared to understand what it is about will have an experience that far transcends even it's considerable value as drama" --- Bernard Levin

Youth Action Theatre, that marvellous brainchild of Eric Yardley, is always at its best when presenting plays that centre on conflict, and their latest venture at Hampton Hill Playhouse last week was Peter Shaffer's masterly 'Amadeus' under the direction of Bill Compton whose production of 'The Madness of George III' for them last year was revelatory.

Ostensibly the play is based on the jealousy of Court Composer Antonio Salieri for the nova-like star Mozart and speculates on the circumstances surrounding the latter's death and Salieri's part in it, whether real or imagined.

The climax lies in Mozart's 'recognition' of Salieri as a messenger of God and of Death beckoning his end - but is this all a figment of the dying Salieri's guilty conscience arising out of a simple envy of a talent that had been denied him, a mere journeyman in the world of music?

All this was set out in blazing clarity by Compton and his marvellous cast, led by Scott O'Brien as Salieri and Mark Wren as Mozart. O'Brien's portrayal of the convention-bound composer was deeply considered, conveying a whole range of emotion from despair to a kind of ecstasy as he rails against a God who he believes has betrayed him. Wren caught the arrogance and the irritating mannerisms of the father-obsessed Mozart beautifully, and between them they showed how with only six years difference in the composers' ages there existed a millennium of a gulf between them.

Zoe Michael made a good stab at the difficult role of Constanze, Mozart's wife, while the myriad of characters surrounding this trio were each given a distinct character, not least Chris Murray's slightly dim Emperor Joseph II and Tara Quinn's stuffy Baron Van Swieten.

Only one thing irritated me, and I do not understand why it could not have been remedied - when speaking in foreign languages, French, Italian and, most importantly German, there were far too many wrong pronunciations.

The simple, basic, almost bare-stage set was handled well, and the lighting was superb, all adding to a deeply moving exposition of a play that can all too easily turn into melodrama -this was much more than that, it was the vision of a soul laid bare.

THIS week saw a spellbinding performance of Peter Shaffer's masterpiece Amadeus by Youth Action Theatre directed by Bill Compton (a recent recipient of a Swan Award) at Hampton Hill Playhouse.

The play purports to recount how Antonio Salieri, court composer to Joseph II, Emperor of Austria, his status threatened by the precocious Wolfgang Amadeus Mozart, sought to discredit and ultimately destroy his young rival by a succession of subversive devices.

The monumental part of Salieri was portrayed by Scott O'Brien who convincingly captured the envious, tortured by conscience stricken plight of the imperilled composer. Mark Wren gave an equally compelling performance as the extraordinarily talented but obnoxious braggart Mozart, seemingly
intent on offending the protocol of the court with infantile falsetto giggles and lascivious observations.

The protagonists were ably supported by Zoe Michael as Mozart's wife Constanze, Chris Murray as the Emperor and the remaining cast of twenty-odd, too numerous to single out for individual comment.

The musical interludes, designed by Nik Rosser, were well integrated with the action ancf particularly, the simulated conducting and playing of the piano by the protagonists (actually played by Jen Caldwell). The minimal set was transformed by the lighting effects created by David Buffham. The costuming of the cast matched the excellence of the production and its direction.