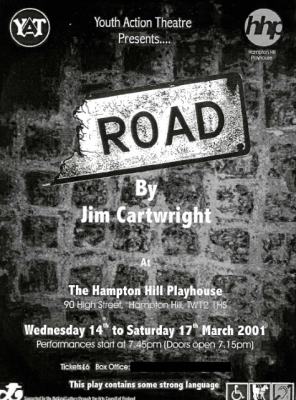 Under the guidance of the rum-soaked, wide-boy, Scullery, the audience is taken on an evening's tour of a scruffy, depressed road in a small Lancashire town. Moving from street corner to living room, from bedroom to kitchen, the inhabitants, young and middle-aged, are presented, showing their socially and emotionally wretched lives in this sharp, sad but often funny play. It captures with bawdy and sometimes obscene precision what it is to be a living reject in this small town in the Eighties.

The play contains some strong language.

Review by Lox Lumboni for Richmond and Twickenham Times (March 2001)

One of the most enjoyable aspects of any Youth Action Theatre production is the energy and enthusiasm that is shown throughout from start to finish, and YAT's production at the Hampton Hill Playhouse last week of Road by Jim Cartwright was no exception.

By no means an easy play to stage or perform, the group have also proved yet again their ability to successfully handle even the most difficult of material. How very refreshing to see a local theatre group taking a detour from the traditional 'safe plays' for once.

Although obviously set in a bawdy northern road in the late eighties (with solid accents from all the cast without exception), it was not hard to recognise people living all around us now in modern day life. There is not enough space to list all the characters that live and travel through the road (a character count of over 38!) but full credit to every single one of the 24 actors and actresses all who made this a fantastic production and an evening's entertainment I wish I could go back and appreciate again.

Special mention must go to Emma Donaghy who showed an outstanding portrayal of Helen, a woman who is clearly so desperate to seduce a soldier, played expertly by Bjarne Lyshede, that she doesn't even notice that he is paralytic to the point of comatose. Scott O'Brien as the rum-soaked wide-boy Scullery kept us 'on the road' throughout and Miles Orru's downtrodden brother Curt, and drunkard Chance Peterson were excellent.

Again I wish I could name everyone as they were all worthy of note. Full-marks and a brownie point go also to Andrew Thackeray whose first major direction of YAT at HHP, assisted by Alice Langrish, was superb throughout. Not only did he ensure from start to finish that the strong language was used correctly for the purpose with which it was written, but he brought to us characters who were believable and made me feel for one of the few times at the Playhouse that I was somewhere other than Hampton Hill

A good, strong, all round production from everyone involved both front and backstage, not forgetting Eileen Baker's excellent costumes.

There are few plays couched in what is euphemistically termed 'bad' language that offer very much enlightenment through its use, but I would make an exception for Jim Cartwright's 'Road', which was given a short run at the Hampton Hill Playhouse last week by Youth Action Theatre.

Or maybe it was the way in which director Andrew Thackeray had persuaded his cast into delivering the text naturally without any emphasis on the obscenities so that the flow of the dialogue was maintained and the pace of this drama of life in a 'scruffy, depressed road in a small Lancashire town' never slackened for an instant.

The guide to this tour of sad hopelessness was the alcoholic Scullery - brilliantly portrayed by Scott O'Brien - who is part of, and yet detached from the life around him. He sets the scene for a kaleidoscope of living that at times touches misery and at others a kind of desperate ecstasy. Each of these scenes is, in a way, a set-piece, giving opportunities not only to the actors to portray real people rather than types, but also to the audience to feel the anguish and misery, as well as the moments of almost hysterical high spirits.

There were many moments of high drama, which were given a neat touch of underplaying, so that the impact was heightened - and this is the mark of real symbiosis of director and cast.

In a large cast there were many outstanding players, and even those obviously less experienced contributed much to the power of the performance.

However, there was one scene that will live with me for a long time, and that is the despairing suicide of Joey who is joined in the tragedy by his devoted uncomprehending girlfriend Clare. Mark Wren and Cheryl Stockman brought these two to agonising life - and death -.that tore into my consciousness as well as my conscience.

Here was Youth Action Theatre at its very best; demonstrating anew what superb talent guided by direction of real understanding and drive can achieve.