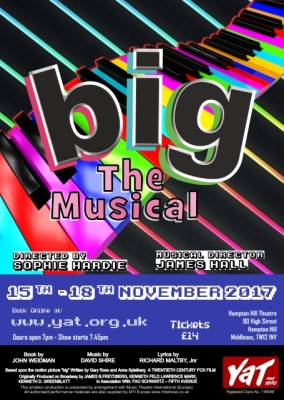 Josh Baskin is twelve years old and hates being little, until one night at the carnival the mysterious Zoltar machine grants his wish to be big. Now trapped in an adult’s body and alone in New York, he innocently tries to find his way around a grown up world where it’s all work and no play. But whilst everyone around him tries to act their age, Josh just can help being himself. Maybe he’s going to end up teaching the real adults a thing or two…

Nominated for multiple Tony and Drama Desk awards, Big the Musical is the heart-warming and hilarious 1996 musical adaptation of the classic 1988 movie starring Tom Hanks.

Big is a joyous musical spectacular that will enchant audiences of all ages as it brilliantly brings to life the magic of one of the best-loved movies of all time.

Big. The show for the big kid in all of us.