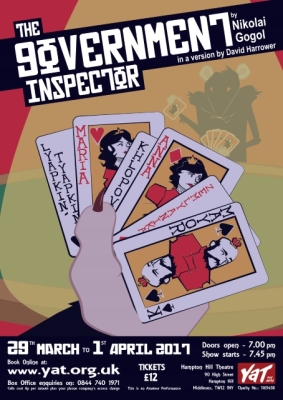 The corrupt and bitter Mayor of a small Russian provincial town (“A pimple on God's arse”) awakens suddenly after having ghoulish nightmares of two black rats visiting him in the night. He soon discovers that his town is to be visited by a Government Inspector from St Petersburg travelling incognito. The Mayor is beside himself as he knows that the ingrained corruption, which permeates every facet of bureaucratic life in his district, is going to be brutally exposed and his neck will be on the line. He learns that a man who fits the description is staying at the local inn and he and his cronies decide to do all they can to impress him.

The play is a Comedy of Errors satirising human greed, stupidity, and the extensive political corruption of Imperial Russia. Subtlety is not at the forefront of this lively comedy, expect big, bold, bright and bizarre characters and a stage that fizzes with vitality, creativity and fun. After recently having successful runs at The Young Vic, Theatre Royal Stratford East and Southwark Playhouse, YAT brings Gogol’s highly entertaining classic to life on stage, at the Hampton Hill Theatre in March!

The Government Inspector
by Nikolai Gogol
Version by David Harrower