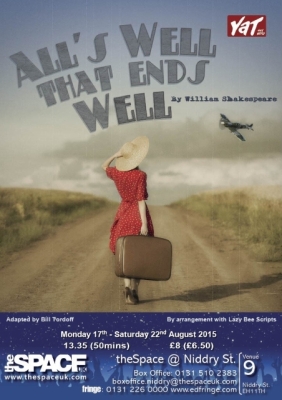 By arrangement with Lazy Bee Scripts.

Helena is in love… Bertram is indifferent… And so begins one of theatre's greatest romances. Shakespeare offers a masterclass in the comic study of romantic ambition and class distinction as Helena eloquently plots and conspires using intelligence, resourcefulness and feminine wiles! All's Well That Ends Well shows strong women winning the war of the sexes as they use wit and wisdom against foolish and frivolous men. Set against a backdrop of the Second World War, this abridged production is filled with comedy amidst the battle of realising true love.

Evocative 1940’s jazz is playing as we enter the sumptuously appointed lower theatre in theSpaceUK’s Niddry Street. Couples, immaculate in their finery, dance cheek-to-cheek. Tempting though it is to grab the hand of the nearest lady and foxtrot my way to a seat, I content myself with humming along to one of the many Glenn Miller tunes that feature as stings throughout this thoroughly enjoyable adaptation of one of the Bard’s most lively of comedies.

We’re in an English country garden, judging by the flora and fauna clad arches that occupy up-stage left and right. That we’re also likely to be the in presence of royalty is evident from the pair of centrally sited, well-appointed chairs.

Cue a nicely paced, well-acted and exquisitely costumed hour of pure Shakespeare. All’s Well That Ends Well is a story of a one-sided romance, with Helen, the orphaned daughter of a doctor under the protection of the widowed Countess of Rossillion, seemingly thwarted in her pursuit of Bertram (the Countess’s son) by his repeated rejections. As ever with Shakespeare’s comedies, there’s a flurry of comings and goings, plenty of plotting (in a nice, love struck way) and a jolly happy ending when all the parties meet on stage, join hands and live happily ever after.

There was much to admire in this sixteen-handed piece. Apart from the very skilful editing and staging by Elizabeth Lattimore and Sarah Dowd and the uniformly strong acting (with due credit to the outstanding Lucy Hanneghan as the histrionic Countess), there were the costumes – again, credit Lattimore and Dowd. These were these expertly tailored and each showed such fine attention to detail, creating the atmosphere of 1940’s war-time in which the piece is set. Even the “bit” parts were exquisitely attired, which gave this production a professional polish more often associated with bigger-budget, main stage theatre.

Sharp scene changes made full use of the numerous exits and little music stings cleverly signposted changes of location and time. And, in another demonstration of attention to detail, hair-cuts were in true 1940’s military style for the gentlemen and those modelled by the ladies told you exactly where on the social pecking order they sat.

YAT is a theatre company run by volunteers that offers opportunities for young people aged between 16 and 25 to perform and to enhance their theatrical knowledge free of charge. Judging by the sixteen well-drilled young actors parading before us today, they have more than achieved their objective with this skilfully staged, well-paced adaptation. What a pity it’s only on for a week – try and get along to their last performance on 22nd August.

A sweet, beguiling Shakespearean romance is skilfully reimagined against the backdrop of the Second World War in Youth Action Theatre (YAT)’s appealing production of All’s Well That Ends Well.

YAT is a much admired, reputable theatre company that offers opportunities for young people to perfect their craft through onstage performance. Now in its 45th year, the company has produced over 130 major productions and can count The Hobbit’s Martin Freeman amongst their past members.

All’s Well remains one of the Elizabethan bard’s less popular and less conventional plays, called a ‘problem play’ by critics due to its tendency to subvert the expectations of typical Shakespearean comedy. The plot follows lowly born Helena, the ward of the Countess of Roussillon, who falls in love with the Countess’ son, Bertram. Whilst the King of France is in favour of a potential marriage between the two, Bertram remains firmly disinterested and so Helena must use her wit and wiles to ensure a happy ending for them both.

YAT has cleverly abridged Shakespeare’s original text into a lively one-hour show. Vivacious performances highlight the play’s romantic and comedic elements, whilst the play’s tragicomic undertones are emphasised by the wartime setting.

The production deserves praise for expertly evoking the feel of the 1940s. Costume designers Sarah Dowd and Elizabeth Lattimore have created gorgeous, well-considered costumes, Emma Woodley’s hair design is spot on and the production makes brilliant use of the period’s music. This twentieth-century realism is juxtaposed with the sensation of a more traditional Shakespeare performance thanks to the set design, which features attractive, ethereal flower arches at both ends of the stage.

These well-considered effects ground the production with a sense of professionalism, which is accentuated further by the young actors’ terrific performances.

As Helena, Sarah Collins-Walters is wonderfully expressive, imbuing the lines with emotion, sensitivity and conviction. Josh Clarke’s Bertram is every bit the proud yet immature soldier, whilst Lucy Hanneghan’s hilarious and hysterical countess is a real highlight. The combination of such a talented young cast and top direction by Elizabeth Lattimore and Sarah Dowd ensures every line is instilled with meaning. This is a production that will appeal to Shakespeare buffs and novices alike.

Fun and light-hearted, yet with just enough pathos and trepidation, YAT’s All’s Well That Ends Well is a fantastic reimagining of one of Shakespeare’s lesser known works and well worth a watch.