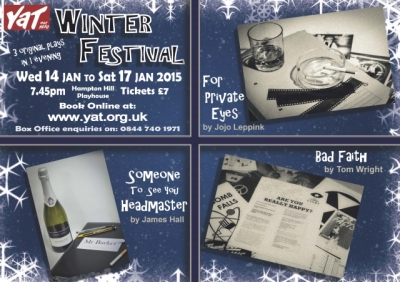 This festival provides an opportunity for our members to write, direct and produce their own pieces.

Someone to see you Headmaster
by James Hall

A comedy set in a Headmaster's office, centered around a foul and lazy headteacher who just wants to eat his lunch. However with a ditsy secretary, incompetent teachers and an out of control school council, lunch is very unlikely to happen.

For Private Eyes
by Joanna Leppink

A one-act play that covers fantasy vs reality for Private Investigator Daniel Ludlow. It’s not a parody of the typical detective movie, but does play off everyone’s knowledge of the genre. Flips between a sad modern day reality in London and a sepia tinted 1940s gangster fantasy in New York.

It's the autumn of 1969, and in a little village in West Sussex, apocalypse is in the air. A sinister cult makes evil plans under the guise of releasing the potential of the mind, and the only ones standing in their way are a local journalist and a semi-competent policeman...

YAT’s Winter Festival offering of three one-act plays presented in the Studio, provided an evening of diverse and diverting entertainment for a chilly January evening.  The plays were written by senior members of the group and showed writing skill and imagination.

The first, Someone to See you, Headmaster, written and directed by James Hall was probably the most realistic, in that it was based on a scenario that anyone who has been through the education system might well have been party to, though I rather hope not.  The Head, played with authority by James Rooza, keen to consume his albeit frugal sandwich lunch, is constantly interrupted by phone calls, members of staff and especially by his dopey secretary.  This latter, was a truly comic role, grasped with enthusiasm by Lucy Hanneghan who did not miss a trick.  Members of staff were somewhat traditional caricatures, especially the OTT drama teacher, but nevertheless highly amusing.  This was a good curtain-raiser for the rest of the evening.  I giggled all the way through.

For Private Eyes, written and directed by JoJo Leppink, the second play of the evening, was a clever representation of fantasy versus reality.  A present-day private investigator bases himself too much on his reading of Damon Runyon and the gumshoes of Los Angeles in the films of the 1940s. Inevitably he is a total failure in drab ol’ London town.  His imaginary story is narrated by a torch-singing vamp who persuades him to track down her errant husband, Big Joe, the most dangerous criminal in town.  Caroline Bradshaw was convincing in this role, dressed in black and white as in a film of the era and adopting a good American accent.

I found the contrast between Benedict Lejac’s real and fantasy self less convincing, maybe because his accent was less pronounced, but his acceptance of his failure rang true as he rang up his mother to beg for bed and board until his luck changed.  His long-suffering secretary, not yet having been paid a penny, was played by Caroline Gudge, while Jacob Taylor looked suitably down at heel tinkling the ivories of the bar piano.

After the interval we returned to a scary story based in the flower-power era of the late 1960s.  Strange cults cropped up in the oddest places, not least in a small village in Sussex.  Here a neglected mansion is home to the adherents of a faith invented and preached by the charismatic American (what else?) Claude Vandermeer, fluently played by Ollie Horsfall.  Jemima, a local journalist, thinks this might be her opportunity to break into national newspapers by revealing what goes on in the Big House.  Jemima (Pollyanna Jenkins dressed in a geometric dress reminiscent of Mary Quant) gets inside and is lectured to by one of the Leader’s faithful followers.  In this role Roberta Doherty convincingly articulated the codswallop invented by the delusional Vandermeer.  A couple of other residents, namely a goofy girl (Kerry-Ann Gill) and a ghastly male pop singer with an over inflated ego (William Willis) make their presence felt.  Last on the scene is the unexpected appearance of PC Archibald Pugh who has heard that his pet hate, Mickey Blanco the pop singer, is here and can’t resist the opportunity of telling him what he thinks of his awful music.  Jack Tidball could not resist performing as PC Plod but is instrumental in bringing about the downfall of Vandermeer who threatens to blow them all up with a home-made atom bomb.

Fanciful?  Yes, but there was a lot of it about in the 1960s.  Just think about the colourful sleeve of Sergeant Pepper’s Lonely Hearts Club Band. And the influence the Maharishi had on at least two of the Beatles.  Thanks for the memory, playwright Tom Wright.

SOMEONE TO SEE YOU HEADMASTER