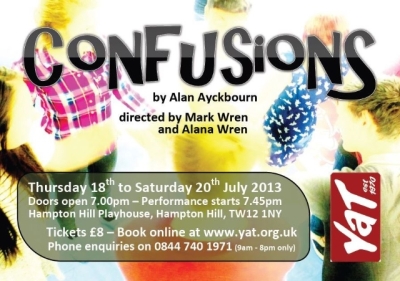 Confusions is a comedy made up of five short plays that are loosely linked with undertones of human eccentricities and the dilemma of loneliness. In YAT's version, the plays are set in a living room, a hotel bar, a restaurant, a marquee and ‘The Park’ Café.

Each play is loosely and sometimes explicitly linked by reoccurring characters, but to suggest the longevity of the themes of loneliness and awkward social interactions, each play is set in a different era of time.

YAT’s production of Confusions by Alan Ayckbourn took to the main house stage during a very hot July week.  The heat did not, however, diminish the energy of the actors in this suite of five short plays.  Typical of Ayckbourn each play had us laughing at situations and characters that, at heart, made us feel uneasy.

The directors,  Alana and Mark Wren, decided to place each play in succeeding decades from the 1950s to demonstrate that the situations represented remain constant.  Human nature does not change.  I can accept the premise but I think that if one decides this is a picture of the the latter half of the 20th century, as directors one has to be extra careful about small but significant detail, especially in set dressing and costume.

Thus in the first of the suite, Mother Figure (1950s) we are introduced to the situation of the housebound young mum focused entirely on her two small children -  to the extent that she does not bother to change out of her night clothes all day.  She cannot remember how to talk to her adult neighbours except in terms in which she might address her toddlers.   Her husband is absent so it doesn’t really matter what she looks like, but I should like to have seen a much more exhausted, care-worn mother in a wraparound woolly dressing gown slopping around in worn down carpet slippers rather than the rather glamorous satin trimmed negligee and mules that were worn here.   This would have helped the young actress slouch around more convincingly.  Similarly the clothes horse would have been groaning under the weight of greying terry towelling nappies.  I speak as one who knows !

Drinking Companion (1960s)  The loneliness of the long distance commercial traveller bored with the thought of another night away from home is portrayed as he tries his dubious charms on two young salesgirls in the bar hopeful for some companionship .  The good-looking girls find his advances unappealing and do not give him any leeway.  Now, if this play had been placed concurrent to the first we, the audience might have wondered if the rep is the absent husband from the first play, especially when he gets no reply to his phone calls home.  The first hint of confusion, maybe ?

Between Mouthfuls (1970s) uses the clever device of conversation overheard at two separate restaurant tables but audible only when the waitress is in the immediate vicinity one or the other table.  However, the snippets of conversation are enough to tell us that there is something going horribly wrong within these separate relationships..  A more than casual acquaintanceship between the wife of one couple and the husband of the other pair is hinted at.  Finally one wife leaves and we know this is a final departure from her over-weaning managerial partner. This was a very well paced piece which dealt admirably with the hurdle of talking and freezing in mid-sentence while the waitress moved between tables.   Wardrobe did a good job with this one.  The cord bell-bottomed strides were so 70s.

I have often wondered why Gosforth’s Fete (1980s) a stalwart of one-act play festivals, is included in this suite of plays.  Hilarious mayhem ensues after the unfortunate gaffe committed by the inept vicar reveals his affair with the cub master’s fiancée via the live loud speaker system to all and sundry, including the cub master who is her betrothed.  The local bigwig , Cllr Mrs Pearce, arrives in her best suit and high heels ready to perform the opening ceremony when the cub troupe cuts loose and rampages over the four acre site.  Poor Mrs P loses her dignity when obliged to tramp through a cow-pat-filled field with dire consequences to her beautiful shoes.  It was great to see the perfectly uniformed cub master also lose his dignity after one or two sherries too many.  A connection with the previous play  was made in the character of Mrs Pearce as the wife who left her husband at the restaurant in the previous play, especially as she was played by the same actress. Maybe she took up local politics in the ensuing decade ?  My niggle about this scene was again about some of the costuming:  footless leggings under a summer dress in the 80s ?  I don’t think so.  But I stand to be corrected.

A Talk in the Park (1990s) however, had a very sad core.  Here we see a collection of misfits of one sort or another desperate to connect with other human beings in order to have a conversation in which to expose their woes.  Unhappily each of the five characters cannot find it in his/her heart to listen to the next person but just finds them a nuisance. At the end one felt ‘here, but for the grace of God…..

Putting my minor caveats aside I, and the entire audience, had a thoroughly enjoyable evening.  There were very clever touches, particularly the use of the transitional scenes with some specially written dialogue to introduce newer members of the group to the stage and to indicate that a change from one decade to another was about to take place.  The overall set design was well thought out and the scene changes were seamless and obviously well rehearsed.

This must be the first review from me in which I have not felt it necessary to comment on diction or projection.  I heard every word.   The characterisations were largely well considered  and maintained which is particularly necessary when actors are doubling up.  Without being patronising, it was a revelation in the bar after the performance to see the youth of these promising actors.  So once again, congratulations YAT for another successful endeavour in a well chosen piece.