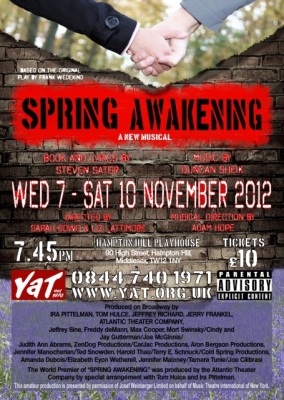 The heart-breaking story of SPRING AWAKENING and its vibrant folk-rock score is as hard-hitting today as it was when it premiered off and on Broadway in 2006 winning eight Tony Awards including Best Musical and Best Score.

The source material and play upon which this is based, with themes of sexuality and identity, is just as topical as it was when conceived by Frank Wedekind in 1891.

Spring Awakening is a celebration of youth and self-discovery that combines classic text and a pulsing rock score. It follows a group of 19th century teenagers as they grapple with sexuality, morality and rebellion in a world of unresponsive adults.

Spring Awakening explores the boundaries of musical theatre to reveal the touching and passionate journey of growing up.

One thing that YAT cannot be accused of is lack of courage: in their choice of material and style of production and acting. Total commitment from every member of the ensemble, including the band and crew, was palpable from the very start. The atmosphere in the foyer was one of excited anticipation and the performance did not disappoint.

This was a modern rock musical version of the 1891 play by the German playwright Frank Wedekind whose expressionistic style and approach was considered too shocking for the bourgeois theatre-goers of the late Victorian era, to the extent that his playts were banned. Even now, it appeared from overheard comments in the bar, the subject matter is still hard for some – young and old – to take.

Steven Slater, responsible for the book and lyrics, and Duncan Sheik who composed the music, have however done great service to this stirring play by bringing it to the attention of a modern theatre-going public.  The score moved seamlessly from stirring rock style to almost elegiac tenderness, aided – to my mind – by the inclusion of the cello in the band.

It’s an uncomfortable piece, dealing as it does with the angst of puberty, the agony and ecstasy of first love, rebelliousness of youth versus the entrenched bourgeois attitudes of the ‘parentocracy’, church and school. In Elizabeth Lattimore, Sarah Dowd and Jenna Powell YAT are fortunate in having a team of directors/designers who are not afraid to tackle difficult pieces head-on. Their work was enhanced by the sensitive musical direction of Adam Hope and the exuberant choreography of Holly Munson. The final chorus had everyone on stage, even backstage crew, and the audience, including me, on its feet.

The tender opening lyric from the principle young girl, begging her mother for help in coming to terms with growing up, broken into by the chorus of teenage girls with a number that Pussy Riot might have been proud of, set the scene for the conflict to come. More explosive still was the schoolboys’ chorus, who stormed the stage with their energetic stomp and fearless choreography, swiftly quelled by the disciplinary methods of the classics master with birch cane in hand. Oh, that Latin lesson! Hilarious and fearsome at the same time.

Of course the girls meet up with the boys and tentative approaches are made between the sexes. The girl gang uncover terrible truths about their home lives, revealing child abuse going on under the cover of family, church-going respectability. Male friendships are forged and overtures to the opposite sex are encouraged. On the other hand, cruel bullying is also indulged in, leading to suicide. An exploratory sexual encounter between the young lovers occurs and when the young girl is found to be pregnant society comes down like a ton of bricks and she dies as a result of a fumbled abortion. Romeo-like, the boy takes his own life when he discovers her grave. The suicide of the two youngsters brings to mind only too readily the clusters of teenage deaths encourage by social networking that occurred just a few short years ago. Children under academic pressure, lack of parental understanding and disapproving society have still, as in earlier times, a lot to answer for. Plus ca change…!

Eclat, elan, energy, entertainment, enthusiasm, excitement, exuberance, all can be applied to this generation of YAT in spades. Eric Yardley founded an extraordinary group back in the 1970s and this production was rightly dedicated to him in the year of his demise.

One can only hope that this cast with the outstanding trio of principles (Amy Hope, Joshua Mathieson and Conor Moss) together with the admirably supportive larger ensemble will join the ranks of TTC so that our membership may benefit from their youthful enthusiasm.

Spring Awakening was nominated in two categories at the artsrichmond Swan Awards for Drama and Musicals 2012-2013:

The production went on to recieve one award:

Best Musical Production
"This 1990's rock musical is based on a controversial German play of the 1890's that was banned for its frank portrayal of abortion, homosecuality, rape, child abuse and suicide. Youth Action Theatre rose to the challenge and produced a celebration of youth and self-discovery with imaginative direction, a superb set, a live seven piece band on stage, exhuberant choreography, and some brave performances. The sensitive material was treated in a mature way by the 29 young actors, with many fine singing and acting performances. A very moving and memorable production."