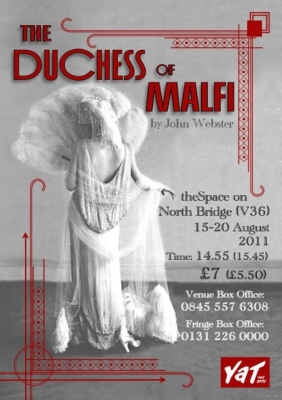 The Duchess of Malfi
by John Webster

A Jacobean drama that starts as a love story with a Duchess who marries beneath her class, and ends up in a nightmarish tragedy as her two brothers exact their revenge. Decadence and Decay is the theme behind YAT's exciting new production. This group of talented young people will transfer the renaissance world of the Duchess of Malfi to the roaring Twenties where corruption and deceit are rife and the Duchess' downfall awaits her.

The Duchess has two brothers: Ferdinand the Duke is her twin, and the other a Cardinal in the Catholic Church. Encouraged by the sinister Cardinal, the Duke assigns his servant, Bosola, to spy on the Duchess to prevent her from marrying. Bosola reveals to Ferdinand the Duchess’ love for Antonio (a man of inferior status) and that she carries his illegitimate child. Armed with this knowledge, the brothers conspire to punish their sister. The Cardinal adds fuel to the Duke’s outrage, and Ferdinand who is mentally weak becomes demented, ordering the deaths of his sister and her children. Bosola carries out his orders but is moved by the Duchess’s show of bravery when her death is apparent and he resolves to avenge her. The Duke by now has become completely insane and contradicts his own orders. At this point the relationships begin to disintegrate with servant turning on master and vice versa.

YAT’s relocation of this play to the 1920’s creates a visual display of self indulgent high society. The Duchess, played by Holly Munson, is exquisite, draped in lace and pearls, with her lady’s maid Cariola assuming the maids uniform of the era. Antonio (Jason Evans) and his close friend Delio are dashingly tall, in tailored suits and trench coats. This had all the appearance of a Noel Coward production but for the dialogue, which stays true to Webster’s text. The cast acquit themselves well in the presentation of this work, convincingly embracing the sometimes absurd plot twists and giving it value. Antony Antunes has the most multifaceted role with the character Bosola who alters his loyalty constantly on what seems like a whim, yet Antunes has us believing that he repents and regrets his actions. The Duchess achieves the impossible which is to accept being throttled without falling into the trap of overacting. The main characters are supported by an ensemble who are enthusiastic, despite still learning the ropes.

In general the sequence of events is tastefully underplayed and this is courtesy of the direction by Sarah Dowd and Elizabeth Lattimore. At points, I would have liked the cast to take more time with their delivery; sometimes dialogue was rushed but the pace of the action felt right. The stage direction was a tad formulaic with exits and entrances in abundance and they may like to do something about the intrusive background noise created by supporting cast moving in heavy shoes when the main characters were addressing each other. On the whole this was a drama that held the attention. The players’ focus on the end goal was clear, and the storyline is a tried and tested formula that contains all the catastrophic elements that occur when human beings become involved with each other.