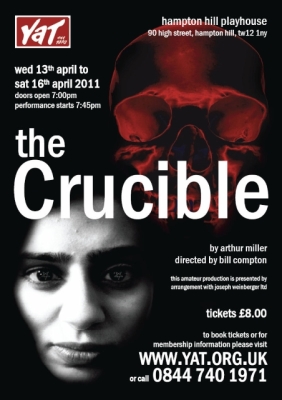 This production will mark the fourth time The Crucible has been presented by YAT since 1970. This time around it has been directed by Bill Compton (who also appeared in the 1994 staging as Giles Corey).

The Crucible
by Arthur Miller

Set in Salem, Massachusetts, 1692, a community stands accused of witchcraft, and in the mood of fear and recriminations that develops, men denounce their neighbours and truth is perverted by superstition. As the small Salem community is stirred into madness and the play reaches it's violent climax, the events it describes, become a timeless vision of the evils of mindless persecution.