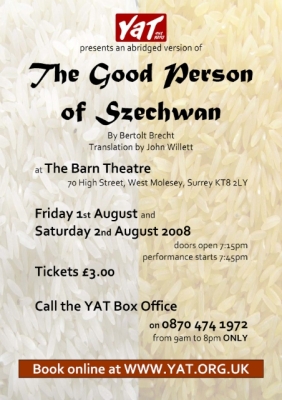 Brecht's famous parable, written in exile in 1939-41, shows that in an unjust society good can only survive by means of evil. In it, the gods come to earth in search of enough good people to justify their existence. They find Shen Teh, a good-hearted but penniless prostitute, and make her a gift that enables her to set up her own business. But her goodness brings ruin and she must disguise herself as a man in order to muster sufficient ruthlessness to survive.

The Good Person of Szechwan is Brecht's most famous parable play, telling the tale that in aggressive and unjust societies good can only survive by means of evil.

I became aware that this was no ordinary production from Youth Action Theatre (YAT) upon entering the performance space and realising that some of my fellow audience members were somewhat slightly oddly dressed. They were of course members of the cast.

YAT tried, with success, to stay true to Brecht's approaches to directing. Brecht encouraged the use of various devices to ensure that the audience were always aware that they were an audience watching a piece of theatre and therefore, in theory, wouldn't identify with the characters emotionally. As such this performance was presented with the Stage Manager on stage throughout holding up signs to depict a change in location, the house lights were kept up and the cast were seated in the audience.

The cast sitting in the audience really created a different dimension and brought the audience into the humour. The decision to perform the play in this format must be commended.

The set, props and costumes were basic and minimal but entirely appropriate for this production.

This complicated but very funny play was performed with a reassuring level of confidence from the young cast. The audience see Shen Teh (Dana Marshall and Charlie Lowry-Corry), a good hearted but penniless prostitute, unwittingly becoming 'the chosen one' of the gods in their mission to prove that there are still good people on earth. At the outset it seems that things are looking up for Shen Teh but her good fortune only seems to bring more distress, resulting in her pretending to be a man in order to muster enough ruthlessness to survive.

The hilarious opening scene sees the Water Seller (Mark Williams) pushing his wares and had the audience in stitches, laughing out loud. He stumbles upon the three wonderfully aloof Gods (Asha Gill, Jason Evans and Miranda Marvin) who are seeking a place to stay. He promises to find them rooms and sets off in search of some good natured and generous people. Alas, he is out of luck until he comes to the last house in the village, Shen Teh's house.

Dana Marshall, who played Shen Teh for the first act, played the role with confidence, handing the gauntlet over to an equally capable Charlie Lowry-Corry who gave a very strong performance, culminating in the powerful court scene where Shen Teh's deception is revealed. The use of two or more actresses to play one character is another device that Brecht encouraged, and although both actresses in this case were more than capable to carry off this role, it did cause slight confusion in the audience.

Hearing of her up-turn in fortune, the family ensemble descend upon Shen Teh with brilliantly funny performances; both the Niece (Asha Gill) and the Old Woman (Michael Bishop) brought out the humour well. Their stay with her ends in a riotous fight between the Man (Antony Antunes) and the Brother (Rowan D'Albert), excellently executed and choreographed - not an easy feat in such a small and intimate venue where the audience can see everything up close and in detail.

Another chancer, Yang Sun (Rowan D'Albert), a convincingly sly con man who sees an opportunity in Shen Teh, preys on her good nature to get at her fortunes. However the path of true (or fake) love wasn't to run smoothly thanks to the likeable roguish characteristics of Shu Fu (Antony Antunes) who tries to save her.

The supporting characters that appeared throughout brought a lively and energetic feel to the production, moving the story on with a great pace. In particular the very heavily but only 4 months pregnant Sister in Law (Steph Van Weira), the exasperated and desperate Carpenter (Adam Brett) and the well meaning and amusingly misguided Policeman (Jess Morley) were of note. Overall, this was a really enjoyable production, and a great evening's entertainment. It was a complicated story to convey, with deception, double lives and more lies and deceit than your average television soap, yet YAT managed to forge a clear line through the twists and turns.

YAT often performs much larger scale epic productions so it was really refreshing to see such a different style of performance from them, something that I hope to see more of it in the future.