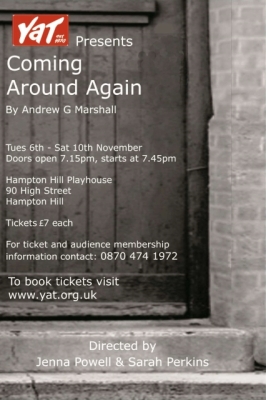 In a small back-to-back terrace in Armley, three family dramas interlink across the decades. With no back yards or gardens, everybody sits out on the step and life takes on a fascinating mixture of the public and the private.

1910. Sean can't bear the idea of anyone touching his beautiful daughter. How far will he go to control her?

1960. Lynda struggles to keep everything together whilst her son John threatens to tear it all apart.

2007. Two students start a new life far away from a possessive father. Can Sam really escape her family so easily?

This compelling play unravels a story of hidden desires and dangerous obsessions. But in-amongst their struggles, their choices and their secrets, one thing remains certain: Ignoring the past doesn't make it go away. In fact, do we ever leave the past behind or does it keep coming around again?

'You can count on blood' and 'Family first' are recurring statements made by the characters of Andrew G. Marshall's 'Coming Around Again', performed by Youth Action Theatre at The Hampton Hill Playhouse.

This play explores themes of family secrets and parental control, the struggle of families through hard times, their resourcefulness, and often strong beliefs that they should stick together no matter what the outcome may be. Spanning five generations of one family from 1910 to 2007 we see, brought to life by the excellent direction of Jenna Powell and Sarah Perkins and performances of the YAT cast, how one generation's problems haunt the next.

Sharing one house the five generations, like ghosts, pass side by side at the same time. With washing lines in the yard and doorsteps that are scrubbed, the grittily realistic set of a terrace house represents the working class streets in all periods, and the music and lighting evoke the atmosphere beautifully.

In 1910 Molly is daring to dream of somewhere other than her home and discovering what young men can offer her. Her Irish mother warns her of leaving home, as she did, maybe never to see her mother again; and also of men. Her father sternly watches over of her. Juxtaposed with this, in 2007, Sam and her 'wet' boyfriend Billy escape her father's oppressing interference only to accidentally live in the same family home that Sam's father once had to leave.

Both Asha Gill (Molly) and Charlene Sargeant's (Sam) characters are convincingly executed. Meanwhile an outstanding performance from Rowan D'Albert as John in 1960 really brings the play to life.

The melting pot of eras and problems brings act one to a claustrophobic climax. Following three stories at once the audience begins to piece together the history of the family and picks up on hints at their secrets. In 1960 Molly's daughter Lynda and her family fall on hard times; Lynda looks to her son John to support her when her husband loses his job and drinks instead of job hunting, but there is always the dream of America, somewhere better.

In act two, the cracks in the idealistic domesticity begin to show, and the families are held together by a thread. The warning story of the legend of Jane Banham, a tale passed on from Erin to her daughters, Molly and Maeve ' Molly dreams of the sea and leaving home, the idea of a loan club with the neighbours to make money ' mother and son dream of America and in modern day Sam and Billy decide to split up so Sam can have some space. And then the revelations hit you: an unplanned pregnancy, a shocking kiss, violence, and a wedding.

There were brave attempts at accents throughout the play although at times I would have liked to turn the volume up and hear more clarity in speech. The characterisation of supporting roles such as Charlie Lowry-Corry's Maureen Pickering and Mark Williams as Sammy made the production enjoyable and lively.

The potential difficulty of presenting the different stories at the same time didn't prove too much of a problem to the cast although occasionally the delivery of lines wasn't as lucid as it could have been; however, the players were able to smooth over any inaccuracies well.

The tension that YAT creates on stage as the play draws to a close is ominous and the cast's energetic approach is rewarding. As they perform, the issues that Marshall unearths in his play make for both disturbing and uncomfortable viewing, although at the end the audience needs to believe that Sam will break the cycle and escape the family's secrets.

As Marshall's play suggests you can't always count on blood but you can count on an enthusiastic and passionate production from YAT.