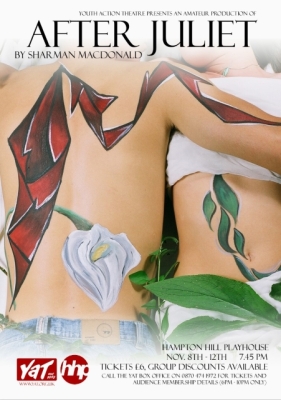 "A glooming peace this morning with it brings;
The sun, for sorrow, will not show his head:
Go hence, to have more talk of these sad things;
Some shall be pardon'd, and some punished"

Romeo and Juliet are dead.

A tense truce holds between Capulets and Montagues after the death of Romeo and Juliet. Benvolio, Romeo's best friend, is in love with Rosaline, Juliet's cousin; but Rosaline is bent on revenge.

After Juliet
by Sharman Macdonald

I find myself in somewhat of a quandary penning this review, since I was not - and still am not - quite sure of what I was watching. Was it a play, a Masque, a fantasia, a choreographic display or an intellectual ego trip? In the cold light of afterwards, I am inclined to think it was all of these, but the balance was heavily weighted in favour of the last two.

I am full of admiration for the choreography and the sheer brilliance of the presentation, the set, the lighting and sound superbly contributing to a most atmospheric evening, and I cannot praise those responsible for this too highly. But is this enough? I do not think so, and hope to establish why during the course of this review.

What is surely of paramount importance in any play is to establish where we are going, and to listen to what is being said to us, thus establishing a dramatic content; I missed a dramatic content for much of the time. This may well be the fault of the play, which I found confusing, since it did not appear to adequately answer the questions posed in the programme. One such question was "what chance for peace in a society that knows only war?" The answer appeared to be No Chance: I picked up a line: "Can the Prince change the habits of lifetime with a word?" and I formed the impression that if Romeo and Juliet had not existed, things would be no different in Verona. Is this what the play was trying to tell us? In which case, it took an unconscionable time doing it.

Although it is entitled "After Juliet", it seemed to me to be also "before" Juliet (particularly as Rosaline, Romeo's ex-girl friend featured so prominently), and also "during" Juliet, with extracts from Shakespeare's play occurring frequently, the scene between Friar Laurence and Romeo in Act II being included almost verbatim. We also had "do you bite your thumb at me?" which you will find in the opening of R & J.

There was, with few honourable exceptions, no attempt at real characterisation, which must help an unfledged audience know who people are and what their function in the drama is, and for this, I do blame the Directors. It was some time before I knew who everyone was. The pace was limp with no movement towards any kind of dramatic climax, and there were long periods of dramatic inactivity - too much Lento, not enough Allegro - to interest us. The first Act petered out, rather than finished, which caused some bewilderment and lack of applause.

As a result, it is difficult for me to dwell on performances, which largely did not arrest us; I do not think this was always the fault of the performers, since I sensed there was a great deal of talent which could not fully blossom within the confines of the production. Some rose above it, however. First and foremost, Robert Drummer as Valentine: here is an assured, stylish, confident actor, with a fine presence and strong natural delivery, who created interest. Josh Duhigg ran him a close second as Benvolio; again, this actor has presence and command - also a stillness of movement and delivery, two valuable assets.

Then, Natalia Joachim as Petruchio. Although, surely, this should have been a male, she nevertheless also made us sit up; her delivery of the lines was strong and authoritative, and I picked up echoes of Shakespeare's Tybalt - she was surely "more than Prince of Cats". Tom Kirkin and Joe Passmore are also worthy of mention: they did convey most aptly the languidness of their surroundings and the basic uselessness of their existence in a World they dont want to change. I also liked Emma Loffler as the Friar (again, this should be male, but I understood male casting difficulties here).

The strength of the above performances highlighted the weakness in others, for which I have to cast another stone at the Directors, by not paying attention to characterisation and to the drama itself. Tara Quinn had the lion's share of dialogue, but failed to live up to it. Her long speeches were monotonous and needed much more variation and impetus; she has presence in abundance, and the fight scene was a real bonus, but she must pay more attention to what she is saying, and also to watch her diction. Miriam Early as Bianca was inaudible for most of the evening, and surely the Directors must bear some portion of the blame for this, because although the feeling was there, we just couldn't hear it!

Claire Younger is a talented actress, but not enough attention was paid to her big scene where, as Angelica, she bids farewell. It must be stronger, more emotional and I am sure she could have handled this: let's go back to R & J. The Nurse abandons Juliet and disappears from the play in Act IV, so we can only imagine what she went through when the ghastly news reached her. The scene in "After Juliet" when she is banished must mirror this, but failed to do so, because of lack of real passion - a directorial fault, not that of the actress.

Hannah McIntosh as Alice was too fidgety, especially with her hair, which started to irritate after a while, and she did not completely suggest the brainless vamp. Again, I sensed she could do so, and needed a stronger guiding hand.

So, summing up, a brilliant presentation, visually, but inadequate as a full-scale production. I have not mentioned Mark Wren so far since he is a separate case from the others. His athletic ability and movement is surely unsurpassed and he dominated the play with a display of dazzling dexterity. But was it all necessary? He intruded over-much, and we were concentrating on him, when we should not have been. I wasn't sure what the Drummer's role was, until a kind friend told me in the interval, and then I naturally accepted that the Directors had decided to dispense with the drumsticks, but should Mr. Wren have been so physical with the actors? Surely a suggestion of contact would have been more apposite and more sinister.

YAT has a great deal of talent and it was disappointing to me to see much of it wasted in what I feel was a Directorial ego-trip in creating a spectacle (which they triumphantly succeeded in doing), but not creating a play. That some of the cast rose above this, and others were there who could have done, proves, to my mind, that we have an abundance of younger talent, which will continue the success of YAT as an institution.