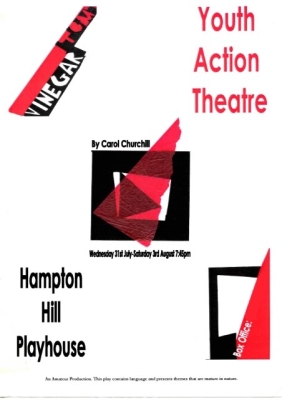 A dark account of how fear and hate can lead to the death of innocent people, Vinegar Tom follows four women in a journey from naive innocence to their untimely executions. Set in the 17th-century during the Salem witch-hunts, the play offers a disturbing glimpse into this prejudiced society. Contemporary music, voice, rhythm, dance and story combine to offer a rare glimpse of the horror and oppressions of our past, while shedding light on attitudes which have carried through to today.

Thanks to J K Rowling and Terry Pratchett, the idea of Witches currently holds a prominent position in the minds of both young and old.

Not so many years ago, however, the word 'witch' would be summoned whenever a cow died or a child fell ill or a man became lame. Over 200,000 'witches' were hanged in England by those looking for someone to blame.

There are no witches in Caryl Churchill's play Vinegar Tom, which Youth Action Theatre recently presented at the Hampton Hill Playhouse.

This allowed full focus on the characters, played with aplomb by the young cast, particularly by Geraldine Taylor in the role of farmer's wife Margery, forceful and resolute against the failings of her husband Jack, convincingly played Adam Green, as their cows die and each is struck down with illness.

The victims of the search for scapegoats are found in Alice, a girl seeking sexual experience in a way still frowned upon today, played with energy and range by Sarah Stewart, Trine Taraldsvik's vulnerable Susan, and Eleanor Manwell's waspish Mother Noakes and perhaps the only real 'witch' in the story, Ellen, played with wonderful assurance by Cheryl Chitty, whose only crime is helping people 'see what they want to see'.

Against each of these, Robert Drummer's professional Packer, with the help of Catherine Burkhill's Goody Haskins, prosecutes either against circumstantial evidence, or at the prick of a pin. As Miles Orru and Tom Wright's demonic clowns, Kramer and Sprenger explain: 'Witchcraft in women is insatiable'.

The production flyer warned of 'Mature Themes', but both the play and the production only served to heighten the absurdity of the need to add this warning. The play was written in the mid-1970s and the notion that issues of female sexuality and social difference might still cause offence is reason enough to perform the play. With Vinegar Tom, Youth Action Theatre has continued its long tradition of challenging both itself and its audience.