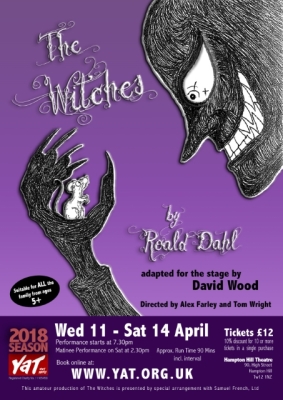 "My darling boy, you won't last very long in this world if you don't know how to spot a witch when you see one..."

There's nothing a witch hates more than children, and there's no creature deadlier than a witch. The monstrous Grand High Witch has come up with a devilish plan to do away with every child in the world, and all that stands in her way is a young boy and his wise old grandmother. It's going to take all their wit and cunning to save the day - if the witches don't get them first!

With its large cast of oddball characters, its magic, monsters and mice (yes, mice), we want to stage the ultimate children's fairy tale, scary and grotesque, comedic and heartfelt and, above all, fun!

The Witches
by Roald Dahl
Adaptation by David Wood

I’m not sure what time it was when I came out of The Witches, though it seemed to have rushed past. But the play still has all the scares, jokes and charm you would hope for, especially if you’re eight years old. Going along at a fair lick, the story is told largely as a series of set pieces, most of them likely to be remembered from the Roald Dahl book the show is based on. The witches’ AGM is one of the most memorable: their arrival down either aisle before taking to the stage is suitably scary (the girl a couple of seats away cuddled up to her grandmother for comfort), while later on their hunt for a hidden boy made even me grip the armrests in tension.

Presiding over her British coven through this scene is the Grand High Witch, played by a flamboyant Zofia Komorowska. In a generically East European accent, she outlines her Grand High Plan to convert the UK’s children into mice before going on to subject two young unfortunates to this fate. The assembled cast of witches revel gleefully in this demonstration of her powers, although as they have their backs to the audience to enable everyone to see the presentation, some of the expository dialogue gets lost. Nevertheless, there’s no doubting that it’s a spectacle, and it is rounded off with a mischievously macabre musical number.

Were the GHW the only character from the continent, I might be tempted to read the play as an unwitting argument for Brexit – “End the migrant magician madness!” etc. Fortunately for those of a more cosmopolitan outlook, our hero, simply “Boy”, has an unaccented but indisputably Norwegian Grandmother (Rebecca Tarry) who is vital in upsetting the witches’ wheeze. This reversal takes place in the hotel restaurant when the coven themselves are rodentified. The space of the stage is here used to its full to include the kitchen and the main dining area at the front, with the high table where the witches sit behind this. As they eat their dinners, laced with the mouse-making mixture, the coven disappears from sight one by one only to pop up again in puppet form, the GHW taking central position as a meaty grey beast.

Key scenes such as these are ambitiously conceived and, on the whole, well realised. Thanks to the production’s technical trickery, the transformation of boys into mice is pulled off like stage illusions of old by bundling them into a large trunk and then having puppets spring up behind it. Meanwhile, when Grandmother regales Boy with witching lore at the start of the show, the vision of one of the devil women themselves (Nathalie Châteauneuf as the splendidly named “Display Witch”) is conjured behind the semi-transparent curtain, preening her way through the description of her gloved hands, toeless feet and baldness.

However, like the witches’ own magic, the trickery can work against its producers. For instance, given the important role of the mice it is not always clear where the puppets are. What makes it odder is that the second act opens with Meaghan Baxter and Ella Barnett as Boy and Bruno donning mousy versions of their original costumes, complete with ears and whiskers. Once this is established, why not allow them to have their exchanges with grown-ups from the lower levels of the stage? When they visit Grandmother, she is sat on an elevated platform stage left, so there is plenty of space below they could scurry around in. Instead, I strained to see the prop mice way up on her table behind the balustrade.

Despite this missed trick, the production is on the whole boldly designed. As well as being the hotel ballroom and dining room, the stage also serves as the facade of the Hotel Magnificent, conveyed by its grand entrance doors and steps … although the pretensions of the name are shown when its sign (deliberately) falls in a perfect diagonal, leaving David Gudge as the fussy, obsequious doorman to have some fun business with a stepladder trying to put it right. When Boy and Bruno are shrunk to mice, their new life at floor level is nicely suggested by having the same stage bare and black, the pair picked out by a spotlight and a subtle echo added to their voices, before an enlarged cat’s paw swipes at them from the wings.

Again, the sound is generally well judged, though there are moments when it is too loud. Boy’s opening monologue is in danger especially of being obscured by the volume of the incidental music, and it is through this score rather than the somewhat rushed montage that I could tell he was being bundled off to Gran after his parents die in a car crash. That’s quite a lot for a young audience to take in. Thankfully, the music tends to support rather than distract from the drama in the rest of the play.

One thing that should certainly appeal to the young audience is the energy and skill of a young cast. In the central role, Meaghan Baxter is convincingly boyish, wide-eyed with enthusiasm or terror as the situation demands, and she is nicely counterpointed both by Rebecca Tarry as his twinkly Grandmother, and by Ella Barnett as the hapless and greedy Bruno. I would also highlight the sterling work of Benjamin Buckley and Emily Coates as Bruno’s dim-witted dad and highly-strung mum, Timmy King and Josh Clarke as a double act of chefs who make fine work of an hilarious slapstick kitchen routine, and Daniel Lee as a froggy familiar to the GHW. But being fair, the young cast share the load fairly evenly, and are of such a consistently high standard that they should also share the plaudits.

For its brief spell, then, The Witches manages to be enchanting.