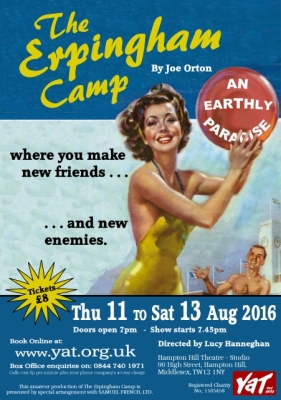 The Erpingham Camp
by Joe Orton

The Erpingham Camp is described as Joe Orton's version of The Bacchae. He has modernised the Greek Tragedy and has set it within a Butlin's Holiday resort camp, politicising the story and commenting on the British government.

The play follows the events that take place over an evening in The Erpingham Camp. Characters from different socio-economic and political backgrounds are introduced and they are forced together (despite their disagreements) in the same room to watch the entertainment provided for the guests of the camp. However, the entertainment organised last minute by Riley, the eager chief redcoat, doesn't quite go to plan...

Fairly but not totally familiar with Joe Orton Plays, The Erpingham Camp is not one I have come across before. It’s been a while since I have seen the Coward room set up in traverse, so was intrigued to see how the play would flow. With a minimum set comprising of only a desk and filling cabinet you were still transported back to a holiday camp in the 60s.

The hustle and bustle starts ahead of the first act with the Red Coats mingling amongst the audience. The main action then begins with a very energetic dance routine allowing the cast to show off their individual characters. The Erpingham Camp is a holiday camp overseen by Mr Erpingham himself with his Red Coat staff headed by Riley, an enthusiastic and keen member of staff who aspires and dreams of becoming the camps entertainment officer. This achieved, the evening’s entertainment goes horribly wrong when he ends up slapping the face of a pregnant guest. Total anarchy prevails when the holiday-makers, led by Kenny, husband of said pregnant lady, starts a riot dressed in a cave man’s suit.

Whilst this play does try to show the class divides amongst the various characters, it is a very fast paced script and requires a lot of energy, this the cast managed excellently. The scenes jumped from office to holiday camp efficiently, mainly due to the wonderful use of both exits, which was no mean feat knowing the cast had to practically run around the building to achieve this. The comic timing of each character was a joy to watch and the audience did not hold back on the belly laughs.

If you didn't see this, you missed out on another of YAT’s well executed and talented treats.

Well done to director Lucy Hanneghan her cast and crew for a very entertaining evening.