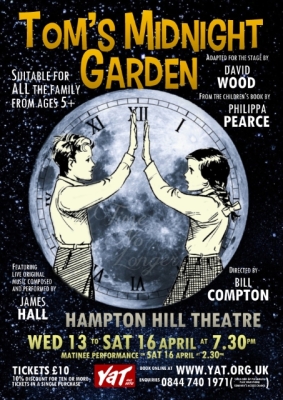 A family friendly adaptation of Philippa Pearce’s 1950s classic novel of a boy’s nightly voyage to a Victorian past.

Quarantined in his Aunt’s and Uncle’s stuffy flat because his brother has measles, Tom is restless and bored. Intrigued by a Grandfather clock, religiously wound by the elderly owner of the house, Mrs. Bartholomew, Tom is startled one night to hear the clock strike thirteen. Slipping out of bed he goes to what in his time is a concrete backyard, only to discover a beautiful Victorian garden of the 1880s. He meets the unhappy orphan, Hatty, who initially is the only person who can see him, and he visits her each night at the same hour, writing enthusiastically to his brother, Peter, about his adventures. But although Tom stays the same exuberant 10-year-old, Hatty grows into a young woman during these visits. Before the story can reach its outcome, Tom has to return to his parents, but the truth is revealed in a touching denouement.

Tom’s Midnight Garden is a modern classic of children’s literature by Philippa Pearce, adapted for the stage by the famously child friendly David Wood. YAT staged the play with a cast of twelve young actors under the direction of Bill Compton who continues the important work of running YAT with an ethos and integrity that Eric Yardley would be incredibly proud of.

I should mention first of all that although YAT members are aged from 16 years, they were joined for this production by four year old Idun Compton who played the youngest version of the main female character Hatty. A smart move by her father/director as it brought not only some deserved publicity to the production but also provided one of the most charming stage moments ever seen on the Hampton Hill Theatre Stage. She was graceful, confident and audible and, although I was slightly jealous at the fact I had to wait until 16 to join the company back in my day, I look forward to more from this promising little actress.

The main body of the play was brought to life by the eleven strong company - well drilled and paced throughout - they were a tight ensemble with a clear understanding of character and place. Another aspect of YAT’s work that audiences have come to expect.

Holding the piece together are the two main characters of Hattie and Tom himself, played carefully and with a child-like energy by Emily Dixon and Alexander Farley respectively. I was impressed by their vocal drive and both gave an impressively sympathetic portrayal of children, really capturing the innocence of their eras. I was particularly impressed with the director’s choice of frozen moments together and the repeated gesture of not quite touching hands through the years when sporadically reunited so that the final scene when they could finally occupy the same time and space was all the more effective.

Inara Stamp had the difficult role of Tom’s brother Peter, a character than never gets to join in the action and also has some of the least dynamic moments to carry in terms of dialogue. She had a sense of the decade of the setting and her quiet longing complimented Tom’s gusto very well.

Adam Parker, Joseph Evans and Eddisson Medina were the mean cousins. I especially enjoyed the apple scene where they moved very naturally in the choreography of the mimed throwing game. Movement throughout was precise and carful – a credit to the director and the disciplined company. The decision to mime all of the props was noteworthy and each mimed item was carefully observed. Joseph Evans mime of the necklace in his scene with Aunt Grace was particularly focussed. He also gave a convincing transition in age and showed a constant seem of sympathy for Hattie – visible under his teasing and then more apparent as a young man standing up to Aunt Grace. The Aunts cruelty was keenly studied and delivered by Jennie Hilliard who also played the mysterious Mrs Bartholomew with a wistful weariness.

Lastly Rob Henderson as the affable Bertie and Lucia Garcia as the flirty Susan completed the company and gave depth to the ensemble scenes.

The simple set of beautifully lit doorways and an impressive central tree created all of the spaces required by the play which included not only the wonderful garden of the past but the top of Ely Cathedral and a frozen river. Lighting and sound ques were sparing and efficient and gave impressions of daytime and night time very clearly. Costumes set the decades very convincingly and were sited to the characters status and style.

Perhaps my only negative comment would be to have given attention to Mrs Bartholomew’s hairstyle as this was one of the only things out of its time – or perhaps that was a directorial decision given the theme of the story.

I must mention the delightful original music, played live to compliment the scenes and changes like underscoring of a film. This extra flourish gave the production a polish and unexpected beauty – compliments of composer and pianist James Hall with Hayley Scurll in Viola.

I attended the Saturday evening show with a friend and our respective children ranging from 10 to 15 years. Each of us were very impressed by the production and felt we were in safe hands for an evening’s entertainment. Congratulations to the whole team for an enchanting production.

“It was so atmospheric, the lights, sound effects and music were just fantastic. This is a must see” - ★★★★

“A powerful and emotional production, performed so professionally by a very talented group of actors” - ★★★★

“A delightful production which my children haven't stopped talking about. Full of magic and energy with a surprise ending that was incredibly moving” - ★★★★★

“An imaginitive use of the space. This was better than a professional West-End production I saw last night” - ★★★★

Tom's Midnight Garden, directed by Bill Compton, had a minimal but very effective setting, consisting of three sets of door frames, angled to give perspective, a realistic tree trunk centre backstage, a small bedroom on one side and a grandfather clock on the other (positioned downstage right an somewhat too close to the tabs).  The handling of the props was mimed which worked well for keeping the flow of this well-known ghost story.

Creating an environment with haze and low lighting works, provided the actors are lit well enough to see their faces clearly, especially for those with lighter voices that may not carry to the back of the auditorium.  Some of the narrative was lost due to this.  Also, when there is very low lighting and the actors are dressed in dark costumes against a black background, it can have the effect of disembodied talking heads moving about the stage.  Full marks to Jack Tidball and team for creating such a magnificent tree as well as the malfunctioning grandfather clock which played such important parts in the story.

The central roles of Tom (Alexander Farley) and Hatty (Emily Dixon) played the young people with sensitivity, their delight in meeting each other and getting scrapes together deepening into innocent affection.  The supporting ensemble worked well together, some of them doubling up to play several roles.  Particularly pleasing was the contrast drawn between the two Aunts:  Jennie Hilliard's Aunt Grace being cold and hard-hearted, while Rachel Pratt's Aunt Gwen was warm and welcoming.

The three ages of Hattie worked well:  Jennie Hilliard (doubling as the older woman), Emily Dixon (the younger) and Idun Compton as the youngest Hattie, stealing her scenes and showing no sign of stage fright as she marched, straight-backed across the stage to confront the clock.  Make a note of this four year-old.  Obviously a rising star.

James Hall's original music, played by him on the keyboard and with Hayley Scurll on viola, created just the right atmosphere for the imaginary world.

The production provided an entertaining evening. Thank you YAT.  It was a shame it was not supported by a larger audience.