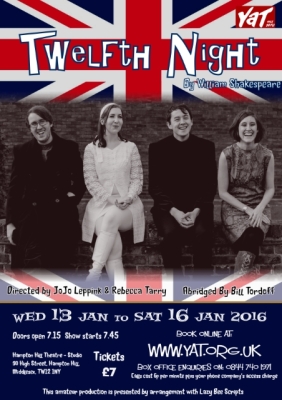 January blues? We've got the cure. Shotgun weddings, secret identities and scheming twins. It's a tale as old as time (kind of...) Join us in 1960's London for a night of comedy chaos, laughable lunacy and swinging Shakespeare all wrapped up in a 60 minute package.

YAT's studio production of an abridged version of Shakespeare's Twelfth Night provided a good evening's entertainment. It was set in the 1960s, a decade of the Beatles, sharp suits, Mods and Rockers, Brigitte Bardot, flared trousers, headbands and the beginning of the 'hippie' culture; a vibrant, colourful era which suited the 'French farce' approach of this short, one hour, play with people constantly popping in from various entrances for a little scene then popping out again, with well-chosen music to cover the scene changes.

I note that the play was co-directed by Jojo Leppink and Rebecca Tarry and assume they must have, fortunately, been on the same wavelength to have ended up with this slick production.

The set was in three parts. One had a kind of throne draped with what looked like a union flag set up on a dais, the other a sort of street setting and between them an 'anywhere' space to connect the two.

The comic nature of the play was set immediately in the opening scene where Orsino, a snappy photographer, played by a very relaxed Jack Tidball, was taking fashion pics of a gorgeously pouting and posing Emily Moss as Olivia.

The two knockabouts, Sir Toby Belch and Sir Andrew Aguecheek, played by Joe Evans and Stephen Rycroft, appeared inebriated throughout. Quite a challenge.They provided much enjoyment and I thought most successful was the underplaying of Sir Andrew showing uncertainty of balance, legs occasionally trying to go in a different direction to the rest of him and having eyes constantly focussed on the middle distance.

Viola's (Caroline Gudge) portrayal as Sebastian (David Gudge) worked quite well though I think that had they managed some likeness in the way they were costumed it would have added to her acceptance as her twin brother.

Alex Farley's portrayal of Malvolio provided some hilarious moments showing a good sense of comedy. He appeared to be in a permanent panic and not entirely in control of events.

It was a good ensemble production with the many characters all contributing to the overall success of the play.

This 'potted' version of a Shakespeare play worked very well and it may be worth considering adapting another of his comedies for similar treatment.