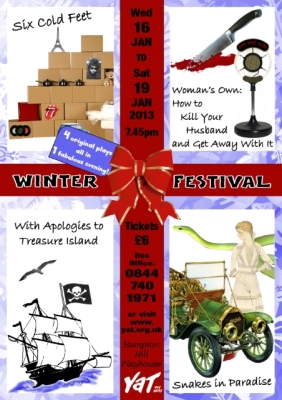 This festival provides an opportunity for our members to write, direct and produce their own pieces.

Snakes in Paradise
by Anna Carlson

A World War 1 comedy set in heaven following Barny, a charismatic yet temperamental gentleman of quality and his loyal chauffeur and manservant Lloyd. A tidy, dapper young man, Lloyd would like to seem more cultured than he perhaps is especially as he is in love with Prudence, Barny's daughter. Prudence is a confused, impulsive young lady with a haphazard and very discreet approach to deduction. And what period piece would be complete without a useless and inarticulate maid! She is the catalyst for the sequence of events in which our characters find themselves hopelessly embroiled!

Women's Own: How to Kill Your Husband & Get Away With It
by Joanna Leppink

A sketch in the style of a macabre 1950s radio show "Women's Own" featuring two stereotypically perfect 1950s housewives with plastered on smiles, sunny dispositions and murderous streaks.

With Apologies to Treasure Island
by Tom Wright

A comedy spoof of Treasure Island and the pirate genre in general. We follow protagonist Jim Hawkins as he is dragged (willingly) off on an adventure of a lifetime. In the company of Capt Smollett, Squire Trewlawney, Dr Livesey and a band of ruthless pirates led by Long John Silver himself - what could possibly go wrong?

Last month’s festival of 4 short plays turned out to be an evening rich with talent allround. Written, directed and acted by members of YAT the evening was a great success. ‘Women’s Own’, the first play, topped and tailed the first half with comedy sketches confidently acted by Stephanie von Wiera and Amanda Astwood, dressed immaculately in ‘50s two tone costume.

‘Snakes in Paradise’ proved to be a bizarre comedy full of misinformation provided by Jack Tidball’s excellent maid, creating a fun sequence of events with all ending up debating the odds in Heaven. The ‘dog’ was superbly entertaining from Carline Bradshaw. For me the casting was a bit awry which masked some of the best writing.

‘Six Cold Feet’ provided a harsher tone to the evening with a short relationship drama acted sensitively if not a little underplayed even in the small space o the Coward. Probably the best directed piece of the evening (Oliver Hickey) this play had great touches and surprises.

Tom Wright’s hilarious ‘With Apologies to Treasure Island’ occupying the second half sent us away on a comedy high. A fun romp through a boy’s own favourite – at times the jokes came so thick and fast I couldn’t keep up with them. Great character performances all round and superlative ones from Mark Williams (Squire Trelawney), Matt Penson (Dr Livesey) and Joe Evans (Flint/Ben Gunn).

This should without a doubt become an annual event please.

WOMEN'S OWN: HOW TO KILL YOUR HUSBAND & GET AWAY WITH IT

WITH APOLOGIES TO TREASURE ISLAND