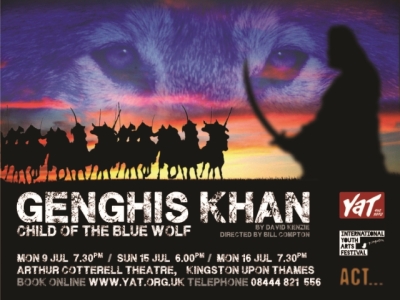 Genghis Khan had its World Premiere in 1994 when it was performed by YAT at the Hampton Court Theatre under the direction of David Lewsey.

Twenty-two actors will lead you on this epic journey, back 800 years, as part of the International Youth Arts Festival 2012 in Kingston upon Thames. The festival takes place over three weeks during July at a variety of venues in and around Kingston. YAT's peformances will be at the Arthur Cotterell Theatre in Kingston College. This is the first time that YAT has taken part in the festival, and it promises to be a truly unforgettable production.

PLEASE NOTE: This production contains violence, adult themes and mature language that is not suitable for anyone under the age of 16.

Genghis Khan - Child of the Blue Wolf
by David Wheatley

David Wheatley's carefully researched epic tells the story of the Mongol warrior who welded a group of warring tribes into a spiteful army that killed, pillaged, raped, destroyed and conquered on its way to creating the Mongol Empire; the largest contiguous land empire in human history. Whilst the focus of the play is on the killing fields and the personal story of those directly affected by it, it also underlines a savage irony that these bullying conquerors could be goaded into retributive overkill whenever one of their victims dared to strike back.

For their recent production of Genghis Khan: Child of the Blue Wolf YAT took a leaf out of their eponymous hero's book and extended their territory across the Thames into neighbouring Kingston to perform at the Arthur Cotterell Theatre as part of the International Youth Arts Festival.

Shortly after the demise of their founder, Eric Yardley, the group did him proud with a strong production of a home-grown piece. The play was conceived and written by one of YAT's alumni, David Kenzie, better known to TTC members as David Wheatley. As far back as 1994 Eric had suggested to him that he might write a play for the group and it was duly premiered at the old Hampton Court Theatre.

So this was the brainchild of a young man who clearly had a philosophical turn of mind. This was evident in the quieter, more reflective passages of this threatening and violent story. Most of us know and think of Genghis Khan as a warrior who successfully unified disparate warring factions into a furious fighting force and who dealt out horrendous retribution to anyone standing in the way of his empire-building ambitions. For all that, Wheatley’s extensive research revealed a tyrant with a surprisingly liberal side to him. He was unexpectedly tolerant of those various different religious beliefs. He was fascinated by the evolution of the written word and a scribe’s ability to tell a story.

And what a story! It was narrated by his trusted cook/cup-bearer who revealed to him the power of the written word. From his account we learned the stories of the Khan’s opponents as well as of the ‘little people’, those whose lives had been irrevocably affected by their leader’s vengeful atrocities.

Bill Compton’s masterfully directed production opened with the players at full stretch and at their most energetic  in a cleverly choreographed slow motion battle scene to the accompaniment of an evocative film score.

The casting was interesting in that, rather than selecting one of YAT’s more flamboyant actors to play Genghis, the role was almost under-played by a slightly-built actor whom I do not recall playing a leading role before. However, with eyes flashing and nostrils flaring, he made his presence felt when aroused to anger, yet still allowed us to believe in the more reflective side of his nature, which I have already touched on. In a strong performance the Khan’s cup-bearer took on the storytelling in his first monologue. His was a pivotal role of which the actor was fully in command. His rape scene which brought Act 1 to a close was delicately handled.

There were several well-played roles but in the absence of a cast list, it was difficult to identify them. The whole cast, whether in silent or speaking roles, put heard work into their characterisations. Good ensemble work showed in the movement and tableaux throughout, the whole enhanced by the costumes provided by YAT’s redoubtable wardrobe mistress and most encouraging supporter, Eileen Baker.

The production was dedicated to the memory of Eric Yardley. What a legacy he left this promising group.