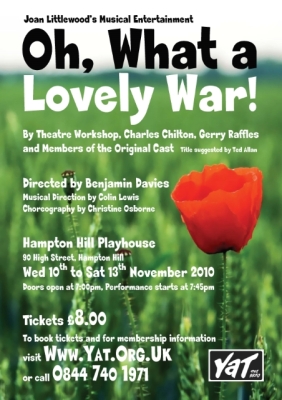 Oh What a Lovely War is a theatrical chronicle of the First World War, told through the songs and documents of the period.

First performed by Joan Littlewood's Theatre Workshop at the Theatre Royal, Stratford East, London in 1963, it received the acclaim of London audiences and critics. It won the Grand Prix of the Theatre des Nations festival in Paris that year and has gone on to become a classic of the modern theatre.

In 1969 a film version was made which extended the play's popular success. The play is now on the standard reading list of schools and universities around the UK and was revived by the Royal National Theatre in 1998.

Oh, What a Lovely War!
by Joan Littlewood
With The Theatre Workshop, Charles Chilton, Gerry Raffles and Members of the Original Cast. Title suggested by Ted Allan

I believe it was pure coincidence that YAT’s choice of production for this autumn slot should fall in the same week that the nation came together to mourn the losses of two world wars and the more recent conflicts in Iraq and Afghanistan. Since I first saw this play and its subsequent film I have felt that it should be compulsory viewing at least once a year for trigger-happy politicians and military top brass.

Ben Davies tackled this difficult and thought-provoking play head-on with a cast of young people whose ages roughly matched those of the recruits the Generals sent to their deaths in the trenches between 1914 - 1918. The stark statistics after the battles, projected onto the dominant central screen, spelt out the terrible losses for such little territory gained. On the evening I attended the audience were shell-shocked into silence by the grim figures.

Oh, What a Lovely War! Is very much an ensemble piece, with a musical hall setting, emphasised by the uniform pierrot costumes worn by all but the Drill Sergeant, a General and the alluring Music Hall singer. Changes of head gear differentiated the many characters/caricatures the cast had to portray. The simple set, with a convincing trench dugout and a large Punch and Judy stage framing the screen allowed the large cast to move around without hindrance.

I was impressed that the French and German speeches were delivered with ease and fluency. However, I was depressed by the lack of audibility of some of the English dialogue. If speeches are being delivered from the back of the stage or in some cases to the back of the stage, the actors must learn to project their voices and to enunciate more clearly. There was no such problem with the musical numbers, which were accompanied by a live sextet. They were well delivered and there were some lovely solo performances. In fact I was moved to tears by several of the songs. The choreography was just enough to add interest to the livelier numbers. I was moved to tears by several of the hymn-like songs.

It would be invidious to mention any single performance. What YAT is good at is performing as a disciplined ensemble, giving and taking from each other so that its performance appears to run along well-oiled wheels. Well done, Ben and your cast for giving is another enjoyable and thought-provoking production. I look forward to the next.